An interesting question was posed to House Speaker Nancy Pelosi this week: “Over the course of your career has your husband ever made a stock purchase or sale based on information he received from you?” The answer was, of course, “No, absolutely not.” This isn’t a partisan issue as Congressional Representatives from both parties have historically shown an uncanny knack for making excellent stock picking decisions. At any rate, the question was posed of Ms. Pelosi as it was recently disclosed her husband (an investor with an impressive track record) purchased a semiconductor stock just as discussion around the CHIPS act reaches a fever pitch in Washington, D.C. The CHIPS act is just one of several political debates simmering beneath the surface as election season ramps up. In this note we’ll take a look at developments on this front, as well as several others and their potential impact on markets.

The CHIPS act was proposed in both houses of Congress more than a year and a half ago. As is the case in Washington, the bill quickly became laden with all sorts of ancillary pet projects and initiatives and progress ground to a halt. As semiconductor manufacturers threaten to pull or reduce announced projects (one of them of interest locally) Congress has newfound energy to get something done. Earlier this week the Senate held a procedural vote that would allow for a final vote finished version of the bill sometime in the next several days. From there, it would head to the House where Ms. Pelosi and other Democrats indicate a willingness to pass the bill. This occurs as semiconductor stocks have been flattened in 2022 over concerns about a downturn in the chip cycle, rising investment costs, and a less friendly political environment. Passage of the bill would ameliorate at least a couple of these concerns.

While important, the CHIPS act debate is just an appetizer. Much more impactful discussions have been going on around the issues of prescription drug pricing and a global minimum corporate tax. The juxtaposition of these issues and what matters to voters is important. As the line chart below indicates, economic concerns are the key issues this election season. 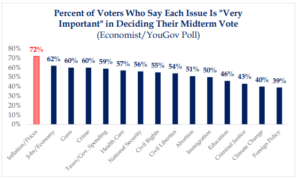 President Biden’s “Build Back Better” agenda called for a broad fiscal package with an initial price tag in the trillions. It was a laundry list of items near and dear to the hearts of most Democrats in Washington. The platform may have had a chance but for inflation numbers that began heating up in 2021 and recently hitting levels not seen in decades. One of the centerpieces of this platform would have been an increase in corporate income taxes, with coordination amongst OECD countries for a global minimum corporate tax. One of our research partners cobbled together a list of companies that would suffer in such a scenario. As the chart indicates, these stocks have underperformed their peers over the last 18 months, but recently have begun to outperform as a global minimum corporate tax looks to be “dying on the vine” as one research analyst we follow put it. 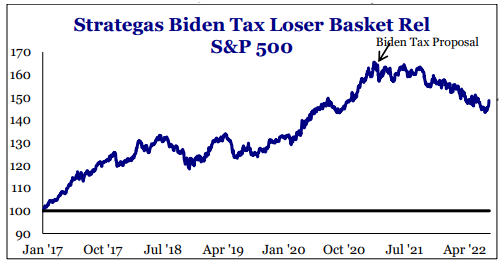 With few policy victories for the administration to hang their hat on, one surviving remnant of Build Back Better is prescription drug reform. If passed, the price controls would impact pharmaceutical and biotech companies the most, with price controls going in effect beginning in 2026. Despite this long lead time, health care stocks that would be most impacted are under pressure after enjoying a bit of a rally over the last 6 months. 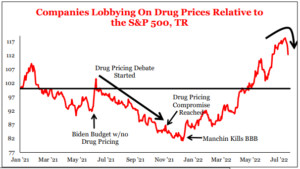 We are always wary of making broad pronouncements of what may happen regarding politics and the impact on markets. Often, investors worst fears or hopes for triumph on this policy or that policy end up not coming to pass. That said, this election season is one where economic concerns are paramount and markets have traded with a degree of sustained volatility we haven’t seen in some time. Tremors from Washington may carry a little more weight than usual. While we think one of the worst outcomes for markets has been removed (tax hikes), there are likely to be winners and losers should the CHIPS act or drug pricing reform pass. Our goal is to refrain from making knee-jerk reactions with the client portfolios we have the privilege of managing, but to be aware of the opportunities and risks and allocate accordingly.