First we talked about Brexit – the British referendum vote to leave the European Union.  Those in attendance seemed relieved the global stock market has put together a three of strong days and has recovered the majority of the losses from last Friday’s market decline.   Putting the market aside, we had a great discussion about facts behind the referendum, the demographics of who voted “leave,” and what the next concern is on the horizon.  We believe it could have huge global economic and monetary ramifications if other countries also decided to leave the EU.  A Spanish “Spexit”, a French “Frexit”, or an Italian “Italeave” (my personal favorite) would all involve countries who use the Euro as their common currency.

We also talked about performance of different areas of the stock and bond markets so far in 2016.  The first half of the year is almost over and although the final first half numbers will be computed today, here is a summary of what we are seeing:

Finally, we talked about politics and markets.  Without promoting either candidate, here are some interesting observations we are seeing related to Hillary, Donald, and the markets:

1. Evidence seems to suggest the stock market would prefer Hillary Clinton president.  Polling data showing the probability of Hillary winning the presidency has a 90% correlation with the S&P 500.

2. Donald Trump seems like the better candidate for banks.  Regional banks have shown a high correlation with the probability of Trump winning the presidency – rising and falling in virtual lockstep with Trump’s polling data. 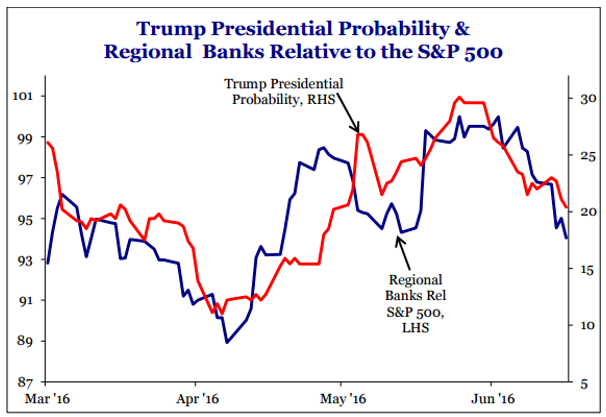 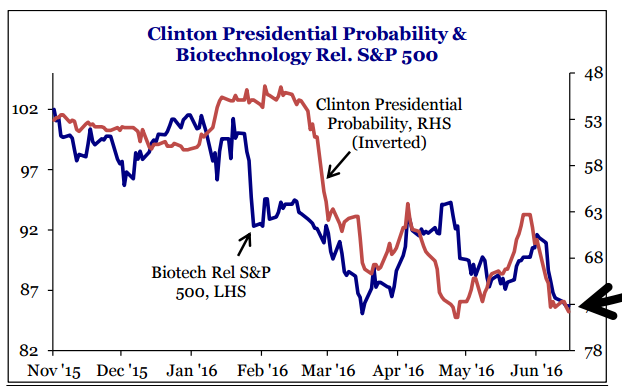 “Portfolios at Panera” is held the last Thursday of every month at various Panera sites around the Columbus area.  We hope to see you at one of these events in the months ahead!