Quantifying the Stimulus and Discussing the Potential Impact

I was having a conversation with Client Advisor and Team Leader Dave Suchland this morning and I asked, “what’s the biggest question you are getting when you are having discussions with clients?” Dave replied, “the biggest question is definitely around all of this stimulus money and how it might impact inflation and markets.” The same question is also one of the major topics in our Investment Strategy Team meetings, so let’s dive in.

Last Thursday afternoon, President Biden signed the $1.9 trillion coronavirus relief package. It’s a little easier to wrap your mind around $1,400 payments, but it’s tough to quantify the magnitude when you start throwing around words like “trillion.” The dollars are huge – according to Dan Clifton, Head of Policy Research with Strategas Research Partners, “the Trump Tax Cut was $700 billion (or, $0.7 trillion) spread over 10 years…the Biden stimulus package amounts to $1.2 trillion in five months!” 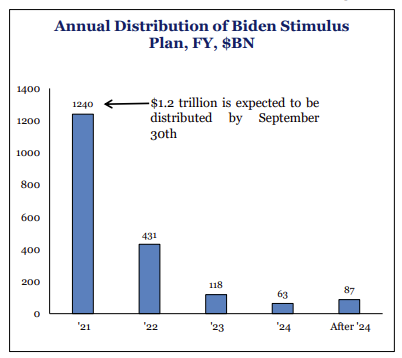 Clifton goes on to show pictures and charts comparing the recent stimulus with other “big spending” periods in U.S. history, including the 2008/2009 global financial crisis. As illustrated in the chart below, the recent stimulus is an order of magnitude higher than other periods and reflects perhaps the biggest spending relative to the size of our economy in U.S. history. 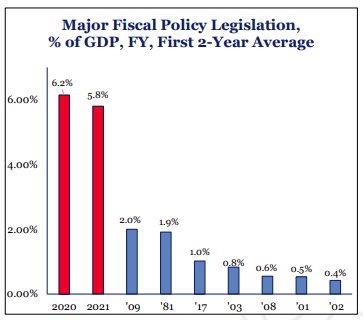 With a historic amount of money being pumped into the economy, it’s likely the stimulus will impact the economy and markets – both now and in the future. Let’s look a few of big areas and potential investment implications 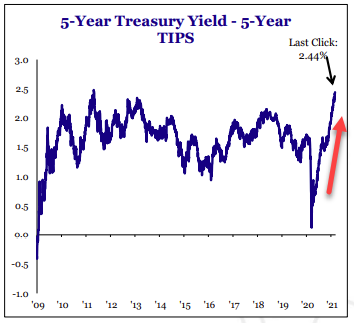 It goes without saying, additional government spending means the budget deficit is increasing. We will save that discussion for another time, but historically, the twin deficits of the budget and current account (trade) deficits have a strong correlation with the trade weighted value of the U.S. dollar. Recently the twin deficits have widened to -20% of U.S. GDP (blue line). If the historic relationship holds, it argues for a weakening dollar in the years ahead. A weaker dollar has asset allocation implications and specifically favors commodities (which are priced globally in dollars) and foreign stocks. 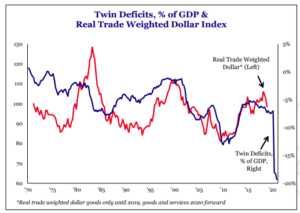 We’d say it’s about more than just stimulus, but longer-term interest rates are moving higher from historically low levels. Rising inflation expectations play a role here, but so does a recovery in the “real economy.” As you can see from the chart below, rates are still low in the context of the last five years, but clearly moving higher. Rising rates are negative for bonds as bond prices and interest rates move in opposite directions.

Less obvious though is the potential impact of rising rates on growth stocks. Recently, we have noticed that on days when interest rates move higher, technology stocks (as measured by the NASDAQ) have struggled relative to other areas of the stock market. Mathematically, this makes sense as higher interest rates make growth which is projected way out into the future less valuable on a “present value” basis. The last several years have seen leadership from growth stocks and we believe declining interest rates have been a factor in that leadership. By the same token, we believe rising interest rates could be a factor in leadership shifting to other areas of the market. 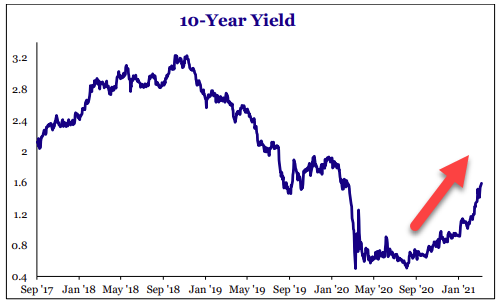 Stepping back from the detail, we don’t want to lose sight of the fact this money is stimulus – it is designed to support businesses and consumer spending and is likely to to have a huge impact on economic growth and corporate profits. We are already seeing analysts revise up their estimates of corporate earnings for 2021, and as the majority of Americans are getting $1,400 checks at the same time as people are being vaccinated and getting out and about, the surge in growth could also be historic.

As always, everything we do is designed to help our clients live their best life. We will keep sharing our thoughts and please reach out to us anytime with questions. Have a great weekend!

Check out this article's companion entitled, Letting Go of Perfectionsim.