Rates and the Economy Are Not the Stock Market

As we start 2023, we get a lot of questions about what the year may look like from a market perspective. “What do you think will happen this year?” “What does your crystal ball say?” I think investors are especially interested given what a difficult market year 2022 was. Last year has the notoriety of being only the sixth year since 1878 that BOTH stock and bond returns were negative and based on the return of the 10-year Treasury, for bonds, it was the worst year ever. 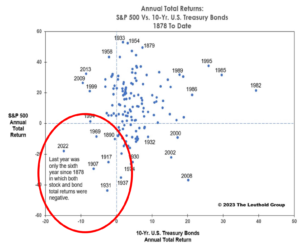 History would suggest a bad year the previous year does not necessarily portend another bad year in 2023. When we look at what happened following those other six years in history when both stocks and bonds declined (see table below), the following year was generally positive – good news. 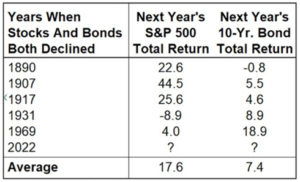 As 2023 gets underway, perhaps the biggest market defining question out there is “what will the Fed do with interest rates?” In a press conference earlier this week, Fed Chair Powell spoke and indicated interest rates would remain high throughout 2023. According to CNBC’s summary of Powell’s comments, he “expects rates to hold at higher levels even after rate increases cease.”

What is interesting to us is what Powell is saying and what is being priced into the market through Fed Funds futures are two different things. The blue line in the chart below reflects market pricing of short-term interest rates after Powell’s press conference. Based on the blue line, here is our summary on what the market is likely pricing in: 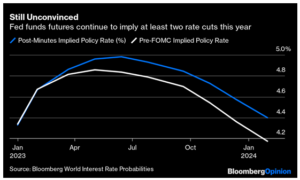 So, despite what the Fed is saying, what would make the Fed do an about face and actually cut interest rates later this year? In our opinion, that are two related likely factors – falling inflation and recession. Falling inflation already seems to be happening – multiple inflation pipeline factors are declining and the five-year breakeven inflation rate (based on bond market pricing bond market) is currently 2.22%, down from 3.57% last March.

The other factor is a biggie – will we get a recession? Economic data certainly seems to be slowing, but some indicators (such as high yield bond spreads) seem to indicate even if we did get a recession, it’s likely to be mild. But, if it is likely we will get a recession, is the right strategy to wait to add exposure to the stock market until the recession is over? We would say that’s where timing gets challenging.

We’ve looked at all kinds of historical examples and rather than show you the collection of six charts with crazy lines I’m looking at right now, I’ll include the one below which summarizes the punchline: the stock market is a leading indicator and tends to bottom and recover before economic data. In other words, history shows the stock market tends to get better even as economic data is getting worse. 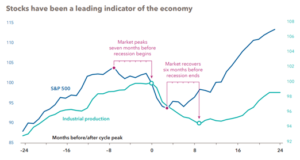 So, what does the crystal ball say for 2023? When we look at the economy, there are clearly caution flags, but the economy is not the stock market. Even amid weakening economic data, the fact the market tends to look forward, coupled with the prospect of lower interest rates later in the year could allow the stock market to get better even if the economic data is getting worse. If a “worse economy but better market” plays out, things may not feel good during the year, but history could have a good chance of repeating itself with positive performance in 2023.

Check out this article's companion entitled, Resolve to Be More Loving.