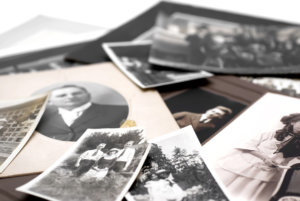 While poking around his grandfather’s tobacco barn in Georgia years ago, 12 year old Derek Veal found an old suitcase filled with photographs – some more than 100 years old.

The suitcase belonged to Derek’s grandmother, who had Alzheimer’s and lived in a nursing home. He took the pictures with him the next time he and his grandfather visited, hoping they might trigger some memories. His grandmother’s reaction was a surprise. “Everything came back to her when she saw these pictures,” he said. “She recognized her sisters, her aunts, her grandparents… It was the first time I ever saw someone’s excitement from an old photo returning to them.”

The experience made Derek realize the power and importance of old photographs. Years later, Derek, now 54, found a stack of old family photos for sale in a Jacksonville, Florida thrift store. He decided to pick one picture and try to track down the family. Soon, he was inspired to buy more photos and started a Facebook group called Old Photo Project to help reunite photos with their families.

Derek is not alone in this hobby. Photo and genealogy enthusiasts world-wide regularly go through thrift stores, flea markets and the like, finding vintage photos with the objective of reuniting the photos with their families.

Social media certainly makes things easier, providing a way to get these lost photos in front of a large audience. David Gutenmacher, an enthusiast in Queens, New York, started the Museum of Lost Memories in late 2020 and now has more than one million followers on social media, helping him identify families. He says he loves solving a puzzle and loves the happiness these old pictures can bring.

Kate Kelley also posts her found pictures on her Facebook page, Photo Angel. Kate says she thinks her hobby has a touch of the divine.

Kate’s favorite story of returning a photograph involved a snapshot of a couple on their 50thwedding anniversary with only a location and date: Maine, 1924. After hours of research, going off the smallest of details, Kelley finally tracked down the couple’s grandniece. It turns out the family had a fire years before and lost nearly all their family photos. “This was the only existing photo of their great aunt and uncle,” Kelly said. “In this line of work, you never know what you’re going to discover next and how you can bless someone else.”

The people who love this hobby say they love the challenge, but it also gives them a sense of purpose. “I feel like this is my calling,” said Kate. And lost photos seem to nudge these people to act. “The more I return memories,” David said, “the more it feels like I’m supposed to be doing this.”

What a beautiful sense of purpose this work must give these people. Using their time and their resources to restore these lost memories makes such a difference in the lives of these families. Family is such a gift, and family memories are priceless – keep your memories close!