At yesterday’s Portfolios at Panera discussion, an attendee said, “It seems like all of this tariff talk is making stocks bounce around and it has nothing to do with the fundamentals of the companies.”  Yes, we’ve noticed that too….in fact, as I’m writing this, futures on the Dow Jones Industrial Average an hour ago indicated the Dow would open down -100 points.  However, an hour later, the headline on CNBC now reads “Dow rises 150 points as Trump tech-related crackdown on China is less strict than feared.”  I’m glad CNBC used the word “feared” – it’s a good reminder these short-term moves which make headlines are being driven by emotions and not fundamentals.

Depending on which side of the political aisle you may be on, some politicians would say the “pro” side of tariffs is that they protect American workers, especially in the lower middle class.  In other words, jobs are more important than “stuff.”

On the other hand, any college student walking out of their Economics 101 class would tell you tariffs create a deadweight loss – tariffs artificially increase prices so consumers use less of a good than they would if the price was set by the free market.  In other words, tariffs reduce overall consumption.

So, setting aside politics, to paraphrase the famous economist, Dr. Tarzan, – Consumption good, tariffs bad.  But how bad?

A LOT has happened in the last 12 months with fiscal policy and the chart below provides some perspective.  Tax reform has provided a huge amount of stimulus to the US economy.  If we look at the approximate impact of lower taxes, government spending, and especially the repatriation of foreign profits back to the U.S., Strategas Research Partners estimates the positive fiscal impact on the U.S. economy is about $800 billion (with a B) dollars.  On the other hand, if we look at the impact of tariffs we have set on various goods as well as the retaliation by the Chinese, the approximate negative impact is about $120 billion. 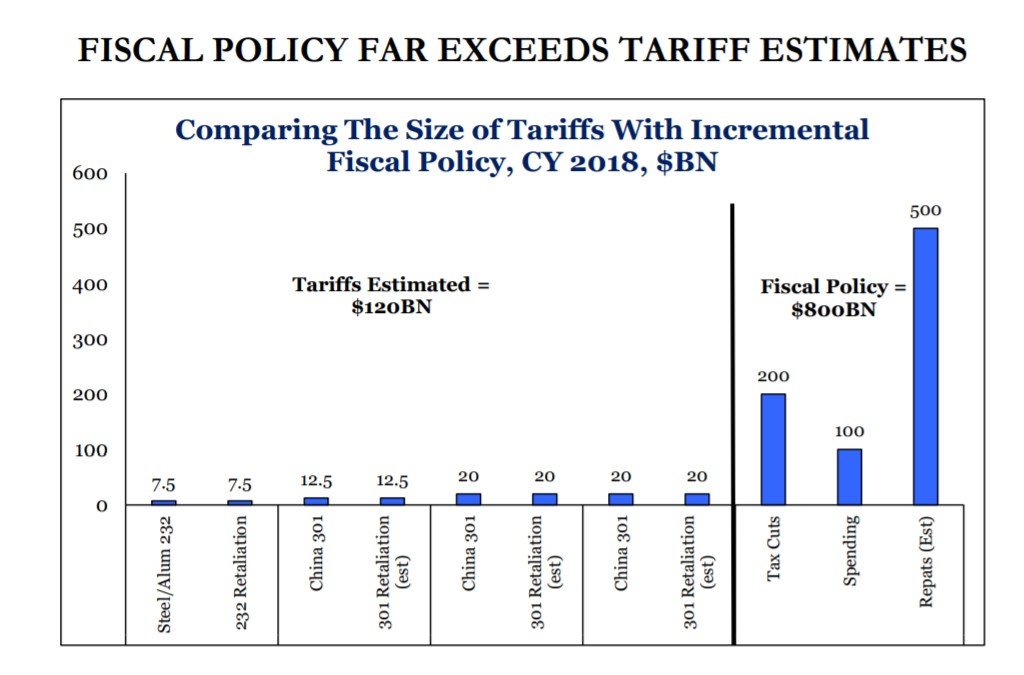 Those aren’t small numbers, but $800BN > $120BN.  In other words, when we look at the totality of fiscal policy and the impact on the overall economy and corporate earnings, the impact of all of the “government stuff” happening is still a net positive.

Of course, this big picture view does not get into the stories of individual companies or people which may be hurt or helped by tariffs.  Broadly speaking though, if these trade battles stay relatively small and do not evolve into a trade war, the positives continue to outweigh the negatives for the economy.

Check out this article's companion entitled, Be Determined to Truly Live.