The Fed Doesn’t Get Any More “Interest”-ing This Week

Earlier this week the Federal Reserve voted to keep short term interest rates unchanged from their current target range of (0.25% to 0.50%). The market reaction to the “hold” was positive as stocks, bonds, real estate and commodities all rallied after the Fed’s announcement on Wednesday and continued to rally on Thursday. The market clearly likes the idea of low interest rates continuing to stimulate the economy – the Fed is not taking away the punch bowl yet.

With the Fed “holding the line” on interest rates at their September meeting, attention now shifts to their December meeting.  Not everyone at the Fed wants to keep rates at historic lows – three Fed Governors “dissented” from the decision to hold this week (meaning they wanted to hike) and economists are currently putting odds at better than 50% that the Fed goes ahead and hikes rates this December.  It’s worth noting some of those same economists had better than 50% odds rates would go up at this meeting too.

Looking at the rest of the world, the Fed is already an outlier when it comes to rate changes.  The chart below shows the number of policy rate changes by major central banks since 2013.  In the last three years, only one major central bank in the world has increased interest rates – the U.S. Fed last December when they took their target range from (0 to 0.25%) to (0.25% to 0.50%).  Meanwhile, other Central Banks including the Bank of Japan, the European Central Bank, and the Bank of China have all been cutting their policy rates. 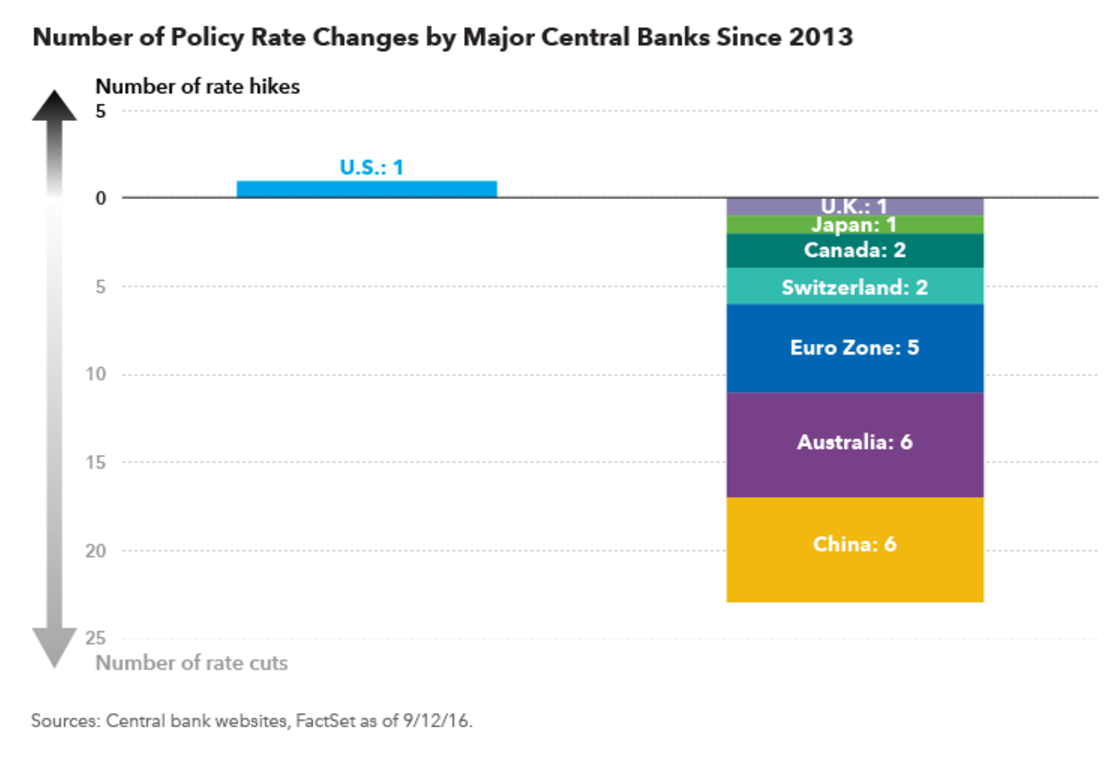 Over the course of the last year, Fed watchers have noted the number of times Fed Chair Janet Yellen’s speeches have referenced “global conditions” has increased dramatically.  Officially, the Fed has two U.S. focused mandates:  1) price stability (in other words avoid inflation and deflation), and 2) full employment.  “Dissenting” Fed governors point to data showing U.S. inflation could be picking up steam and unemployment remains low thus justifying higher interest rates.  However, others in the Fed seem to be looking outside of purely domestic data.  We think the Fed wants to avoid being a major “outlier” in the world economy and risk political upheaval and currency fluctuations.  As a result, until conditions change in other places in the world, we think there a case to be made that interest rates in the U.S. could continue to stay lower for longer.

Check out this article's companion entitled, 5 Things Impacting the Legacy We Leave.