The Market Says – “Give Me Rate Cuts!

One question I (Travis) get often from people who know what line of work I’m in is “what’s driving the market?”  The financial certifications I studied years ago would suggest the answer to that question should be corporate earnings, cash flows, valuations, and economic growth.  Lately though, the conversations seem to gravitate toward politics, trade wars, and the Federal Reserve.

The last few weeks, the Federal Reserve and the likelihood the Fed will cut short term interest rates this year are front and center.

First a little history lesson – let’s go all the way back to December, 2018 (7 months ago).  Economic data was strong and in December, Jerome Powell and the Fed increased short-term interest rates with expectations they would continue to increase rates, with potentially as many as 3-4 hikes in 2019 (this year) as a way to keep the economy from overheating.  The market reaction was not good and the S&P 500 was down about -9% in December 2018.

Fast forward to today – economic data is weaker, earnings growth estimates are lower, and the Fed has reversed course.  Interest rate hikes are off the table and the possibility of rate cuts is dominating discussions.  And it’s not just whether the Fed will cut rates this year, it’s how many times.

The chart below gives a good picture of what is happening. 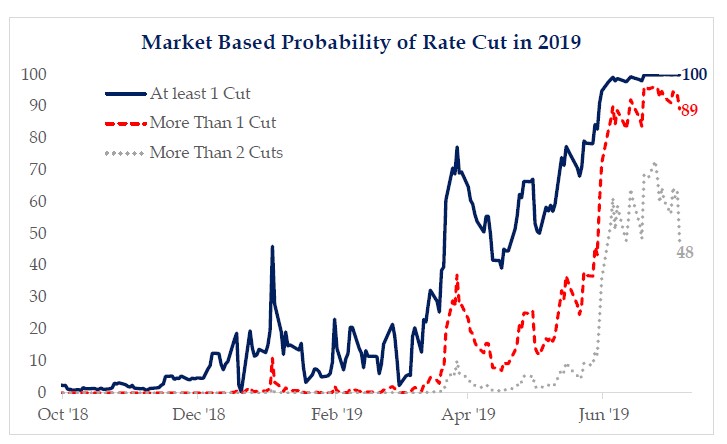 The chart reflects the market-based probabilities of the Federal Reserve cutting rates this year and here is a summary of what it is saying:

So, back to the question – what’s driving the market lately?  The last few weeks, the stock market has been highly correlated with the probability of rate cuts – when the probability of Fed rate cuts goes up, so does the market and vice versa.  The Fed’s next meeting is July 31st, which happens to be my birthday!  I think I’m going to be charitable and ask for a rate cut because based on the market’s behavior, no one wants a surprise from Fed Chairman Jerome Powell.

Check out this article's companion entitled, The Two-Minute Rule.