> Wealth Notes > Inspire > The Power of Bookending Your Days

The Power of Bookending Your Days 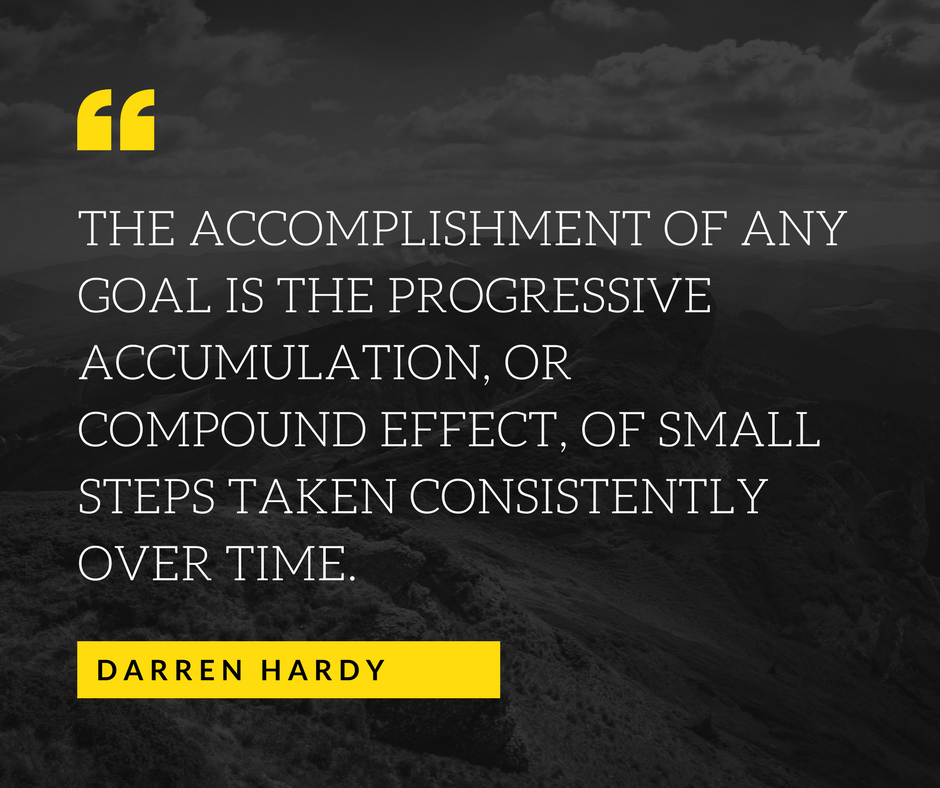 To Inspire:  In our last Wealth Notes, we shared a three-step formula for your best year ever.  At its core, the formula calls for all of us to make small incremental changes each day that move us towards a desired goal, maintaining that small change day after day for weeks, months, even years.  It is this approach (versus establishing huge changes that cannot be maintained) that allows true change to occur – a change that is sustainable and that, in time, becomes dramatic.

Today we share one additional tip from the same book: Darren Hardy’s, The Compound Effect.  It is the power of bookending your days.  At the beginning and end of each day, have a well-established routine that positions you for success.  As an example, here is a summary of the  morning and evening routines that bookend Darren’s typical day:

5:30 – awakens and spends 8 minutes doing the following: 1) he first thinks about all the things for which he is grateful; 2) he “sends” loving thoughts to someone in his life, and 3) he thinks about his #1 goal and the things he is going to do that day to advance towards that goal.

5:38 – Darren puts a pot of coffee on and does a number of stretching exercises while it brews.

5:45 – Darren then sits in his reading chair, sets his phone timer for 30 minutes and reads something positive and instructional to get his mind moving in a good direction.

6:15 – When the phone alarm goes off, Darren switches to his most important work project and works on it for exactly one hour, without stopping.

7:15 – Only after an hour of productive work does Darren then open his calendar to calibrate/set up his day.  He takes 15 minutes to do this – first reviewing his quarterly, monthly and weekly goals and then establishing his goals for that day by looking at his specific meeting appointments and then filling in the rest of the day with specific projects and tasks that move him forward on the goals he has identified for that day.  Note that he has now been up for nearly two hours and has not yet opened or read a single email.  Instead, he has: gotten his mind and body energized, worked an hour on his most important project and set up his day.  Only then does he look at emails and send his own – to his team, key clients, prospects, etc.

Darren now knows that even if the rest of the day totally bombs, he has gotten many key things done and advanced on his most important projects.

In the evening, Darren “cashes out,” his day’s performance – meaning he compares the plan he set for himself that morning with what he actually accomplished.  Did he accomplish what he wanted to accomplish?  If so, what were the keys to that success?  If not, what were the obstacles?  What did he learn that he can apply tomorrow and future days?  He also writes in his journal any ah ha! moments, new ideas, people he wants to follow up with, reflections on any particular meeting, insight or topic, etc.  Finally, he reads 10 pages of an inspirational book, knowing that the mind will continue to work on that subconsciously while he sleeps.

Darren is starting and finishing his days strong.  What about you – what routines can you establish to increase the likelihood that your day will result in productive success rather than frustrated failure?  Create your own morning and evening routine and be a fanatic about implementing it each day.  Adjust if necessary but ALWAYS (except for weekends or vacations) implement your routine.

Your best year ever begins at the bookends. Have a great week!

Check out this article's companion entitled, Streaks Are Made to Be Broken.