The Search for Income

At the beginning of 2016, the interest rate on the 10-year U.S. Treasury Note was 2.30%.  Today, that rate is 1.48% – close to all-time record lows and a huge surprise to economists and prognosticators who were coming into the year looking for higher interest rates.  The rate decline has been a huge benefit to the bond market because bond prices act like a teeter-totter in response to changes in interest rates.  When rates move down, the other end of the teeter-totter, bond prices, move up.

The decline in interest rates has also seemed to have a significant impact on the stock market as investors look for other places to earn income.  So far this year, dividend paying stocks have significantly outperformed “growthier” stocks.  Sectors such as utilities and telecommunications (think companies like American Electric Power and AT&T) have led the market while “growthier” areas like technology have seen many large companies have relatively flat performance (think Apple and Google as examples).  As a result, even though markets has a whole are up, we are seeing conservative allocation strategies outperform more aggressive allocation strategies.  Whether we look at our own allocation portfolios or broad Morningstar categories, the conclusion is the same – return is not moving linearly with risk.

When we look at the data, stocks benefiting from “the search for income” could continue to be a major investment theme.  Look at the chart below which shows the percentage of stocks with dividend yields greater than the 10-Year U.S. Treasury rate: 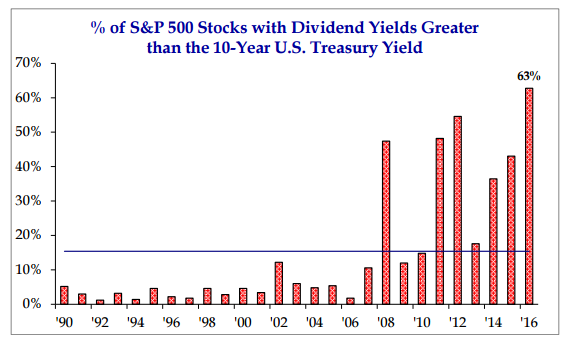 Investors usually think of “bonds” as the place to invest for income.  Throughout the 1990’s interest rates were relatively high, so the idea of income producing stocks was largely an afterthought.  From 1990 – 1999, less than 5% of S&P 500 stocks had dividend rates which could compete with the bond market.

Today, it is clear we are in a much different environment – over 63% of companies in the S&P 500 have dividend rates which exceed the interest rate on the benchmark 10-year Treasury note.  In over 25 years of data the “stocks over bonds” argument for income has never been more prevalent.

At some point, a focus on valuations will kick in – “how expensive can dividend paying stocks get?”  But until then, we expect “the search for income” to continue as a driving theme in markets.

Check out this article's companion entitled, What Are You Scattering?.