The Stimulus Keeps on Coming

President Biden released his infrastructure proposal earlier this week. Let’s review some of the facts and share thoughts about how further stimulus may impact markets.

The White House proposed spending about $2.2 trillion (with a T) over the next 10 years. The spending consists of $1.7 trillion in investment in physical infrastructure with another $500 billion going to workforce incentives and Medicaid benefits. According to research from Goldman Sachs, here is how the infrastructure piece breaks down:

Another proposal is expected to come later this year. It is worth noting the White House has indicated the President will announce a second proposal (in April?) dealing with “human infrastructure” which refers to spending on child care, health care, and education. In other words, the stimulus keeps on coming. Ultimately though, it is up to Congress to pass the proposals and whether they decide to consider the proposals separately or combine them remains to be seen.

Paying for it – tax Increases. According to the Biden Administration, the 10-year cost of the current proposal would be paid for after 15 years through tax increases, largely in the corporate sector. Here are the highlights of the proposal to pay for it:

Considerations for the impact. Markets are going to be digesting the current proposal and so are we.  Here are a few important considerations The Joseph Group’s Investment Strategy Team is focused on.

Analysts expect corporate earnings to come in at $202.11 per share in 2022. The proposed corporate tax increases are estimated to shave $11.82 from that number, resulting in a $190.29 estimated earnings number. 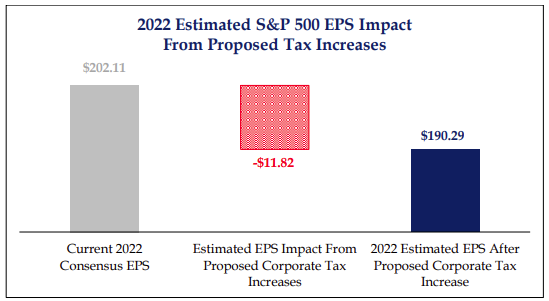 The bad news is a lower earnings number results in a higher price to earnings (P/E) ratio, which in turn implies higher valuations for stocks. The good news is even with lower forecast earnings, the earnings growth rate is still strong – the growth rate is expected to decline from 15.1% to 8.4%. 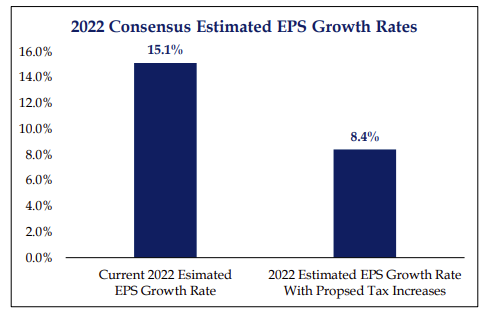 There is a ton of stimulus in the pipeline for 2021. Between payments to individuals and tax refunds, the U.S. Treasury is estimated to have distributed over $422 billion of payments to consumers in the month of March alone. AND this is money that is hitting as economies are opening as vaccines become more widely available. We expect economic data to look amazing in the months ahead as more consumers spend money and industries such a restaurants and tourism hire more people. Anecdotally, I had two separate conversations of people looking to book cruises today. Between vacations, dining out, and people getting back to the office, re-opening is looking massive.

The infrastructure stimulus package proposed this week and the human infrastructure proposal expected to come next month are much longer term in nature and have costs, such as tax increases, which will create winners and losers. From a market standpoint, we are expecting more volatility as markets digest tax increases and higher interest rates, but the growth backdrop surrounding it all is significant.

Check out this article's companion entitled, Finding Spirituality in the Garden.