> Wealth Notes > Inform > Three Highlights from Portfolios at Your Place

Three Highlights from Portfolios at Your Place

Last night we hosted a Portfolios at Your Place event to a capacity crowd of Joseph Group clients and friends. We talked about a multitude of topics, but I want to share a few key highlights.

Regardless of how an investor may feel about the mid-term elections politically, historically, the market is entering into a positive seasonal period. The chart below shows the performance of the S&P 500 during each quarter of the four-year presidential cycle. This data looks at different time periods (back to 1871, the post WWII era, and recent times back to 1981) and regardless of the era, the three quarters following the mid-term elections have generally been the most positive for the markets. According to Strategas Research Partners, the stock market has generated positive returns during the 12 months following a mid-term election for the last 80 years.

Portfolio Manager Alex Durbin noted the fact that Republicans control the House while Democrats control the Presidency and the Senate should result in gridlock. All major legislation going to the President’s desk would have to be bipartisan meaning huge changes (i.e., major tax increases) are unlikely. In general, investors like political gridlock as it reduces the likelihood of policy surprises. 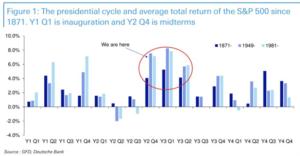 Mixed Signals on the Prospect for Future Recession

If an economist wanted to prove either a recession is coming or the economy is going to avoid a recession, they could find a data point to support that view. We discussed the fact that different indicators are currently giving different conclusions when it comes to the prospect of a recession in 2023. For example, the yield curve (a fancy term for a graph of government bond rates at different maturities) is currently inverted, meaning short term interest rates are higher than long term interest rates. An inverted yield curve is historically a warning signal a recession may be coming in the next 12-18 months. On the other hand, credit spreads for high yield bonds, a measure of credit stress in the economy are improving! Today, the interest rate high yield bonds are paying over and above government bonds (the spread) is about 4.7%. That compares to a long-term historical average of 4.5% and is significantly below not only the 6% level where spreads were on June 30th, but also below the 8% level the market has seen during recessions over the last 20 years. 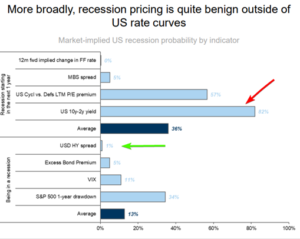 Last week, members of The Joseph Group team had the opportunity to hear a presentation from Dr. David Kelly, Chief Global Strategist for JPMorgan. Dr. Kelly noted key cyclical indicators which typically portend a recession are currently at levels at or below their long-term averages. According to Dr. Kelly, “Even if we get a recession next year, it should be mild. Cyclical indicators are not over extended – you aren’t going to hurt yourself much falling out of a basement window.”

We wrapped up our discussion noting recent leadership in the stock market is not coming from big name technology stocks as it has for the last several years, but instead is coming from sectors such as energy, health care, financials, and industrials. 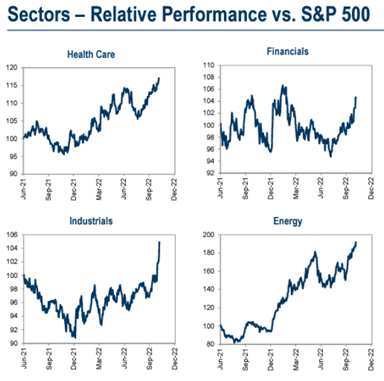 We noted these areas are generally consistent with a value style of investing (as opposed to growth) and tend to focus more on cash flows and dividends. While we don’t want to completely throw out our growth stocks, we want to tilt our stock exposure toward different areas of the market.

In the weeks ahead we will share details on other upcoming events. In December, we plan to host an event discussing “Capital Market Expectations” and the math behind future asset class returns. Then in January, we plan to continue our tradition of discussing themes for the upcoming year which are likely to drive our portfolio management decisions. After all, in the words of Steve Leuthold, “forecasts are for show while changes we make to portfolios are for dough!”  We look forward to seeing you at these upcoming events and please feel free to invite a friend!

Check out this article's companion entitled, JUST STOP YOUR COMPLAINING!.