China watchers have noted a marked shift in the attitude the Chinese Communist Party (CCP) has taken towards the business class in China. Chairman XI has been using the phrase “common prosperity” to describe the CCP’s philosophy of narrowing the country’s wealth gap between rich and poor. This philosophy of common prosperity has resulted in a number of policy decisions in recent months that have in some cases eviscerated industries that are at odds with Xi’s vision for China. Problems at Evergrande, the second-largest property developer in China pose risks to Xi’s vision, but does it portend greater problems that will ripple across the global economy?

Before we can answer this question, we need to first understand the problem facing Evergrande. Evergrande’s problem is a tale as old as time. Too much leverage. The company has liabilities of more than $300 billion. Evergrande piled up these debts by borrowing from banks, customers, and even employees. Recent reforms the CCP imposed on the property sector have created stresses for the more leveraged developers like Evergrande, drying up some sources of funds. This comes at a time when Evergrande is on the hook for a substantial amount of interest payments due on their bonds. 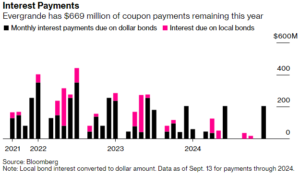 The message a messy default sends to the world is hardly compatible with Xi’s theme of “common prosperity”. We received a note last week from an Emerging Markets manager we have a relationship with that posited that the Chinese government will act to prevent a full market meltdown and all the pain that entails. According to them, what this means is likely a “bail out” for customers who’ve paid for housing units but have not yet taken delivery. The costs of this bail out are likely to be borne by local governments, banks, and other Evergrande creditors. A more cynical view is that Xi is not likely to allow a spectacular implosion this close to next year’s party congress, held once every five years.

The impact outside of the immediate creditors to Evergrande is likely to be felt across the real estate sector in China, and we’re seeing this with increases in the yields on Chinese HY bonds, the majority of which are issued by property developers. Much of this debt is contained within China or is owned by investors in emerging markets debt. 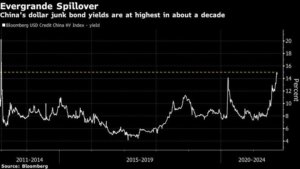 For now, we’re inclined to believe that the issues affecting Evergrande are contained largely within China. As history buffs, we are aware that in the past “contained” has often been one of those “famous last words”. We recognize that the Evergrande debacle is still early innings, so we’ll be keeping our eye on the ball as the situation develops.

We’ve assembled a dashboard of key indicators that will tell us whether or not concerns over Evergrande appear to be spreading outside of China. Credit spreads on global banks are showing no signs of stress, the US dollar, a safe haven currency, has not moved substantially, and government bond interest rates seem to be pointing to acceleration, not a slowdown in economic activity around the world.