Last night we hosted a Portfolios at Your Place event where we unpacked eight key themes we think are key to navigating financial markets in 2023. Over the next several weeks, we will unpack those themes with our readers. Let’s look at two today.

Across almost every indicator you would want to look at, the rate of inflation is starting to trend in a downward direction. Whether it’s consumer prices (think energy), transportation costs, housing, used car prices, or wages across the income spectrum, the rate of change appears to be pointing to lower inflation ahead. 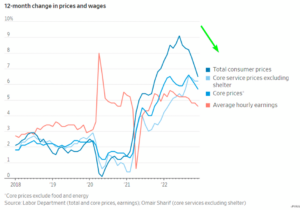 Longer-term inflation measures are coming down as well. If we look at the 5-Year Breakeven Inflation Rate implied by inflation-protected Treasury bonds, the rate of inflation over the next five years is expected to average 2.09%. That rate is not as low as it was pre-COVID, but it is lower than any point we have seen since inflation started to surge post-COVID, and in line with the Fed’s 2% comfort zone.

Inflation coming down has a host of implications as we look forward into 2023. Lower inflation makes bonds relatively more attractive; it could support a weaker dollar (which would be a positive for foreign stocks) and could support a soft landing for the economy.  Which brings us to our next theme….

Recession Question: How Do We Reconcile Inversion and Spreads?

Perhaps the biggest question on investors’ minds is will we have a recession in 2023? Most people seem to think so. The Philadelphia Fed has a Survey of Professional Forecasters, and that survey is pointing to the highest expectation of a recession in the next 12 months…ever. In other words, if we do have a recession, it is the most expected recession of all time. 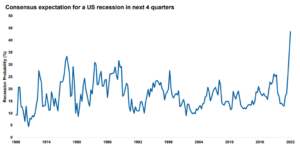 However, the news is not all dire. While some indicators like the “inverted yield curve” (see chart below) are flashing a red alert with short-term rates higher than long-term rates, other indicators, like credit spreads are pointing towards a healthier economic backdrop. 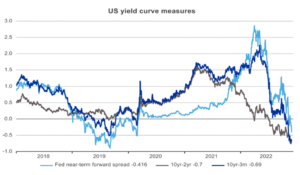 Let’s unpack the chart below. As of January 17, the US High Yield Option Adjusted Spread is 4.19%. The spread reflects the amount of interest over and above the government bond rate investors are demanding as compensation for bearing the risk of default. We like to look at high yield bond spreads because they are indicators of credit conditions and credit stress in the corporate bond market and banking system and a lower number is better. Let’s put the recent 4.19% number in context…again…lower is better.

So, today’s value is not only lower than recessionary conditions, it is also lower than the historical average and lower than what we saw six months ago. In other words, the market is pricing in less credit stress and better corporate credit conditions than six months ago!

So how do we reconcile all of this? We shouldn’t ignore indicators like the yield curve, which is flashing a red alert, nor should we ignore indicators like credit spreads which are flashing a green light. The most logical implication, in our opinion, is that we do get a recession (if we have not already had it) but it is relatively mild by historical standards, and one which diversified investors should be able to navigate.

It is worth noting JPMorgan Chief Global Strategist Dr. David Kelly sees little excess in the economy which would cause a sharp decline in activity from current levels. In a recent presentation, Kelly stated: “we may get a recession next year, but you aren’t going to hurt yourself much falling out of the basement window.”

We will unpack more themes in the weeks ahead. As we look at a couple of the themes which impact the big picture economy, we are seeing things trend in a better direction. And since financial markets tend to respond more to “better or worse” than “good or bad,” a “better” could imply a better 2023 for investors.

Check out this article's companion entitled, Kick the Success Addiction.