Vacationing From the Headlines 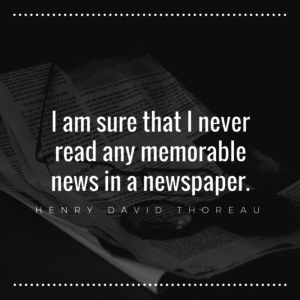 Christians throughout the world are nearing the end of Lent, a 40 day period in which they strive in modest ways to enter into Christ’s suffering: giving up certain pleasures (like coffee or desserts) and/or taking on additional acts of charity and prayer.

In a recent issue of Success Magazine, writer Jonny Auping decided to give up reading/watching or discussing the daily news.  Not for religious reasons but simply as an exercise to learn if one can find greater peace of mind by taking a vacation from the daily headlines.  Enjoy these excerpts from Jonny’s article:

“When I grabbed coffee with a reporter friend early in the month, I made the disclaimer that we couldn’t talk politics or current events and I couldn’t help but be a little embarrassed when it resulted in a few awkward silences.  What else do you talk about when you can’t talk about, well, what’s happening?

About a week in, I had started to become a bit unhinged.  Feeling removed from society, I purchased Henry David Thoreau’s manifesto, Walden, in which he leaves civilization behind for two years of self-sufficiency in a cabin.  In it, he said, “I am sure that I never read any memorable news in a newspaper.  If you are acquainted with the principle, what do you care for the myriad instances and applications?” he asked.

The events of Walden took place circa 1845-1874 – long before the beginning of the 24-hour news cycle.  But how does someone reach any level of intellectual stimulation in the 21st century when removed from current events?  Early in the month, my response was that it wasn’t reasonably possible (note, of course, that a key element to addiction is our ability to convince ourselves that we can’t exist without whatever we’re addicted to, and I wanted my news fix!).

I can’t pinpoint the moment when the challenge of living without news got easier;  I just know it was a least a week before the moment I was willing to admit it.  That moment came during my visit with Neville, an acquaintance of mine who is a novelist, technology writer, and tennis instructor.   He let me finish describing the hardships and emotions of the experiment before casually mentioning that he had avoided the news for most of the past two years.  What shocked me wasn’t that Neville had gone so long without the news.  It was that I previously had a number of stimulating exchanges with him and had no idea.  Meanwhile, I continued to disclose my no-news policy in the majority of my conversations with people and soon realized that there was actually plenty to talk about without the news.

After my conversation with Neville, I began to realize my own withdrawals had begun to wane and that my mind was a little more open to creativity and introspection.  My 20 minute walks to the coffee shop were a bit more reflective and three weeks in I prepared chicken tacos with pico de gallo and fresh corn, not even recognizing till later that it was the first thing I had cooked other than the same four meals for over three months!  I handwrote a script for a short film in mini-breaks from other projects I was working on and I even tried to teach myself the ukulele.  It wasn’t that I actually had more free time on my hands – it was that I had more head space for these things.  More peace of mind.

When the month ended, unlike Neville, I chose to go back to reading the news. But I was much more careful not to chase it or let it be the backdrop to everything else.  And in the process, I came to terms with a tiny bit of my own self-righteousness.  I had spent the better part of a month treating the news like a drug I couldn’t’ live without, but I found out that is actually a lot like the weather.  You can’t reasonably avoid every aspect of it and some of it will directly affect you.  But every morning you have a day’s worth of life to live, even if it’s raining.“

So, clients and friends, you might consider giving up a pre-occupation with the daily news.  Perhaps you still scan the headlines in print or online.  But otherwise, refocus on other aspects of your life and the world: time alone in reflection or prayer; time with those you love; reading a novel or biography; learning an instrument.  News is news – and Thoreau is right, it’s really the same old song sung with slightly different notes.  But your life….ah, now there’s something that only you can sing – with a daily melody never to be repeated again.  So break your addiction to living through the lens of the news and make your own news by truly living!

Source: Auping, J. (2017). What Happened When I Avoided the News for 30 Days. Success Magazine. Retrieved from https://www.success.com/blog/what-happened-when-i-avoided-the-news-for-30-days

Check out this article's companion entitled, The Market is Positive, but It's Time to Look Under the Hood.