Earlier today, a voting member of the U.S. Federal Reserve (Boston Fed President Eric Rosengren) made statements which created a strong market reaction.  According to Rosengren, the Fed believes continuing to keep interest rates low may present “longer-term risks from significantly overshooting the economy’s growth.”  As a result he stated “a reasonable case can be made for continuing to pursue a gradual normalization in monetary policy.”

Members of the Fed seem to always speak in confusing sentences and big words, but to the financial markets, Rosengren’s words meant one thing – interest rates are going up.

As we are writing this note, most major asset classes are down on the day including stocks, bonds, real estate, and gold in the biggest correction in over a month. (For perspective, the S&P 500 is still trading less than 2% from all-time highs). With recent economic data being lackluster, market implied probabilities of the Fed raising interest rates when they meet on September 21st were low. Those probabilities surged after Rosengren’s comments and the market reaction seems to stem from digesting that change.

The biggest thing we are watching is the bond market. Today, the benchmark 10-year Treasury bond is trading at 1.67%. For perspective, 1.67% is still close to historic lows and is still much lower than the 2.27% the 10-year Treasury rate was at on January 1st of this year. However, the magnitude of the move is important. Below is a chart from about a week ago from Strategas Research Partners indicating that any rate move above 1.63% would be a “technical breakout” and could mean a larger rising interest rate move. The red arrow indicates were rates are today. Keep in mind bond prices and interest rates have a relationship like a teeter-totter. When interest rates go up, the other end of the teeter-totter, bond prices, goes down. 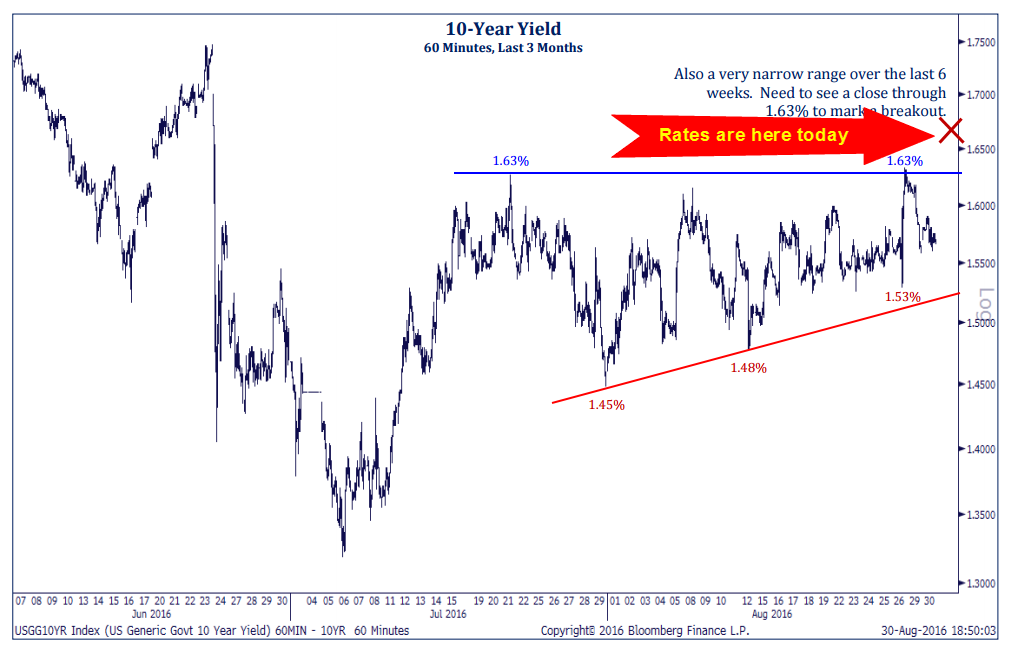 So what are we doing about it in client accounts? The best time to take action is before a market move so we are not making major trades today. However, across client accounts we are strategically underweight bonds and to extent we do own them, we are focused on corporate bonds which are less sensitive to rising interest rates. Some clients may have also noticed receiving trade confirmations the last couple of weeks. We did not know a major rate move was coming, but in certain strategies we made rebalancing trades to trim overweight stock and bond positions which had run up in price when rates were falling.

On the news today, noted fund manager Jeffery Gundlach said “it’s time for fixed income investors to prepare for rising interest rates and higher inflation…interest rates have bottomed.” Time will tell if Gundlach is correct, but we are paying attention.

Check out this article's companion entitled, The Secret to Health and Happiness.