Watching Your Weight and the S&P 500

For fun, let’s start this Wealthnotes with a multiple-choice question.

Which of these is correct?

You are probably thinking, okay that really does not make any sense. It’s about a 7% difference between the two numbers, so how can they both be correct? There has to be more to the story here. Well, there is more to the story and it all comes down to how the stocks within the index are weighted.

The S&P 500 Index, which is a broad index investors use to measure the performance of the U.S. stock market, consists of the 500 largest publicly traded companies in the United States. The mainstream S&P 500 is market-capitalization weighted, which is a fancy way of saying that the larger the company, the bigger the weight it has in the index. Recently, leadership in the stock market has been found in technology stocks and a number of large technology companies were among the first to recover after the COVID-19 induced market plunge in March. As a result, the market capitalization (which is calculated by multiplying the current stock price by the number of outstanding shares) of these technology companies has grown and their stocks are occupying a bigger weight in the S&P 500 Index. 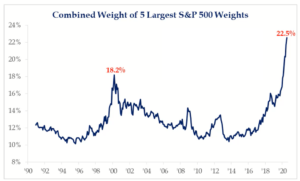 Jason Trennert, Managing Partner of Strategas Research Partners questions whether putting such a big emphasis on only five stocks makes sense for most investors. In an article late last week, Trennert asked “would any risk manager or investment consultant ever consider it prudent for an active manager to have nearly 25% of their holdings in merely 1% (5 out of 500) of the positions that make up a portfolio?”

The gap in performance is certainly something we are paying attention to. On one hand, we are very cognizant trends, especially in technology, have been accelerated by COVID-19 and the associated economic lockdowns. On the other hand, when investing over the long-term, valuations matter. The last time the weighting of the Top 5 companies in the S&P 500 reached a peak was in March of 2000 (with technology stocks also leading the charge) when the concentration of the Top 5 reached 18.2%. The years which followed were a time when smaller companies outperformed.

The bottom line is, we are watching our weight – the weight of companies in our portfolios that is. Big technology companies have had incredible performance momentum the last few months and we think their role in the global economy is important. However, better forward-looking investment opportunities may be found in the other 495 S&P 500 companies and not just the five which are dominating the index.

Check out this article's companion entitled, Thriving in Times of Change.