At next week’s Portfolios and Pints event we plan to focus on The Joseph Group’s “5 Investment Themes for 2020.” For those unable to make next week’s event, we also plan to unpack some of those themes over the next few weeks in the “To Inform” portion of WealthNotes.

Our “Top 5 Investment Themes for 2020” reflect the major discussion points we are having in our Investment Strategy Team meetings. These themes are driving the way we are positioning client portfolios as well as driving the factors would lead us to make changes within those portfolios.

This week’s theme is “We don’t think the Fed wants to get political and watch anything that appears like QE.” So, let’s avoid the investment jargon and unpack each part of that statement.

PART 1: First, it is our belief that the Federal Reserve wants to avoid appearing to have a political bias in what is likely to be a contentious election year. Fed Chair Jerome Powell has already been on the receiving end of numerous tweets from the President questioning his job performance and even sometimes his mental capacity. The attention likely frustrates Powell, but the impact could be positive for investors.

We believe politics create an extremely high bar for making any changes to interest rates this year. Here is our theory – if the Fed were to increase rates, the political blowback could be huge if the Fed were accused of trying to slow economic growth and influence the outcome of the election. On the other hand, if the Fed were to cut rates, there would likely be an outcry the Fed was bowing to political pressure coming from the President. Either way, the media attention would be negative implying the best action for the Fed is to stay quiet and keep the Fed Funds Rate unchanged. We believe a stable Fed funds rate is a positive for financial markets – if the Fed is on the sidelines it removes a source of worry and concern for corporations and investors alike.

PART 2: The second part of the statement is “watch anything that appears like QE.” QE stands for quantitative easing and is a fancy term for the Fed pumping liquidity into the financial system, essentially by printing money to buy government bonds. We believe one of the lessons from the last decade is that the stock market loves liquidity. When the Fed has been putting liquidity into the system, stocks have generally performed well and times when the Fed is removing liquidity have coincided with stocks having more of a struggle.

Last Fall, a number of economic indicators were flashing warning signs and in September there were significant issues in short-term funding markets that had some media outlets proclaiming another 2008 meltdown was on the horizon. The Fed stepped in by putting large amounts of liquidity in the system (we liken it to pouring Draino on a clogged sink) and the end of last year marked a strong finish for the global stock market.

PUTTING IT TOGETHER: The chart below illustrates both parts of our theme. The light blue line shows the historic path of the Fed Funds rate. The Fed has indicated they intend to keep Fed Funds rate on hold at 1.75% and we believe politics will force the Fed to stay on hold until after the election. We believe the Fed leaving rates unchanged is a positive for growth and for stocks. The dark blue line reflects the size of the Fed’s balance sheet and you can think of it as what the Fed is doing with their proverbial gas pedal. When the line is moving up, the Fed is stepping on the gas and growth has the potential to grow faster. When the line is moving down, the Fed is taking their foot off the gas and things have a greater potential to slow down. As you can see from the green circle, right now the foot is on the gas which helps create a positive backdrop for the economy and stocks. 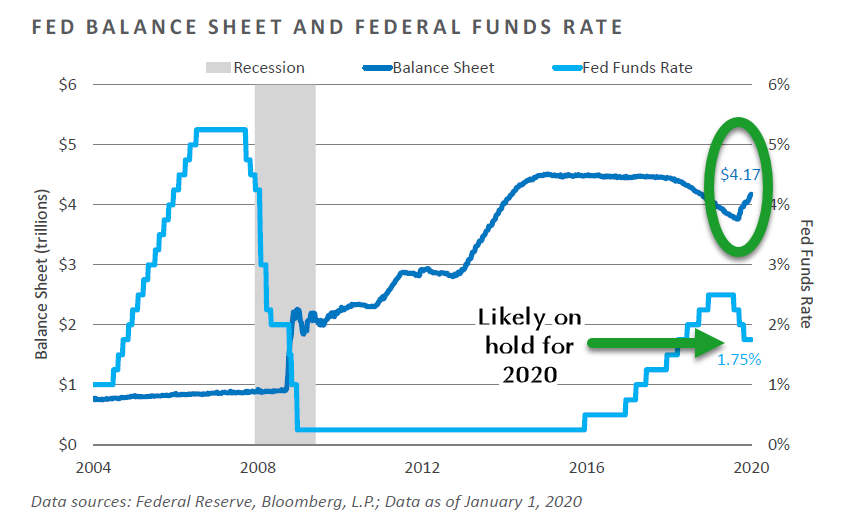 The current position of the Fed creates a positive backdrop for the market and stocks. If we saw any changes to either of the points we discussed above, we may need to roll out a different portfolio game plan. The bottom line is “we don’t think the Fed wants to get political and watch anything that appears like QE.”

Check out this article's companion entitled, Balancing the Dimensions of Human Nature.