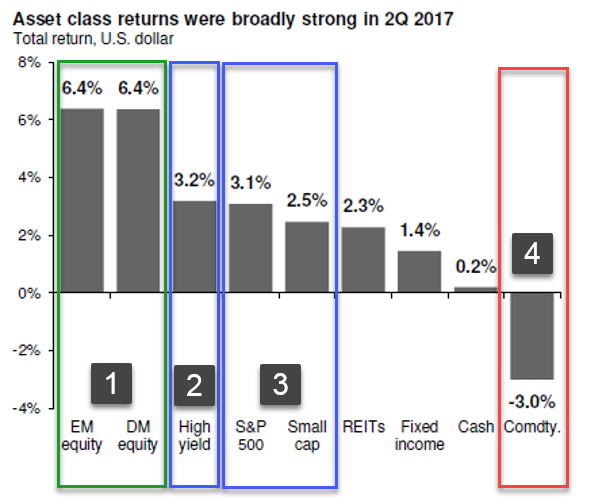 1. International Stocks led the market in the 2nd quarter and factors are in place for that leadership to continue.  Looking at stocks in emerging market (EM) areas like India, China, and Brazil, as well as developed market (DM) stocks in areas like Europe and Japan, there is a “trifecta” of good things happening which continue to make foreign stocks attractive in the second half of the year:

· Growth is accelerating faster overseas than in the U.S.  When we look at corporate earnings globally, earnings for U.S. stocks are strong and growing, but earnings growth is happening even faster outside of the U.S.

2. High yield bonds outperformed U.S. stocks in the 2nd quarter, but bond math says this trend is close to impossible to maintain if markets continue to move higher.  With a solid economic backdrop, investors bid up the prices for high yield (or junk) bonds and the combination of interest and price appreciation exceeded the return of U.S. stocks.  Looking forward, the “spread” (or amount of interest investors earn over and above the government bond rate) is close to historic lows.  High yield bonds are still paying overall interest rates of 6%, but we see little opportunity for further price appreciation to add return to the interest payment.

3. Large U.S. stocks (S&P 500) continued to outperform small U.S. stocks.  At the beginning of the year, a prominent investment magazine touted 2017 as the “year of the small cap stock.”  However, in the first half of the year, small caps have lagged large caps.  We believe the reason is political.  Small cap stocks pay higher effective corporate tax rates than large caps and therefore stand to benefit the most from corporate tax reform.  With Republicans in Congress unable to come to an agreement on health care reform, the prospect of having Congress agree on tax reform is appearing less and less likely.  We believe this is a major factor causing small cap stocks to underperform.

4. Commodities were the big negative performer in the 2nd quarter.  The only negatively performing major asset class in the 2nd quarter was commodities.  If we look at the commodity complex as a whole, prices for major commodities such as gold, copper, wheat, and corn have risen so far this year.  The negative result is attributable to a fall in one key area – energy.  Using oil prices as an example, oil was as high as $54 a barrel in April, but fell to as low as $42 in mid-June – that’s a 20% correction in the 2nd quarter.  Since the end of June, we have seen oil prices recover to around $49 today.  We believe the concerns surrounding oil are the result of too much supply rather than falling demand.  With OPEC countries looking to reduce supply to keep prices steady, coupled with the prospect of a continued fall in the dollar and higher inflation, we expect commodity returns to improve in the second half of the year.

Check out this article's companion entitled, Encouragement from a Friend.