> Wealth Notes > Inform > What a Week in the Financial Markets!

What a Week in the Financial Markets!

Wow, what a week in the financial markets.  This week saw three big market-moving events:

So, what are we thinking after a rough week in the markets?  For one thing, we think it’s an important reminder about the benefits of diversification.  Bespoke Investment Group sent out the chart below earlier this week and we will confess it even surprised us.  It’s been widely publicized that U.S. stocks have hit record highs recently.  However, over the last year, the US stock market has had close to a 20% decline and then a 20% recovery.  Even the last few months have been a roller-coaster – U.S. stocks were down -6% in May and then +7% in June.  At the same time, boring old bonds (the red line) have benefitted from declining interest rates and over the last year, despite U.S. stocks hitting record highs, high quality bonds have actually outperformed U.S. stocks on a total return basis. 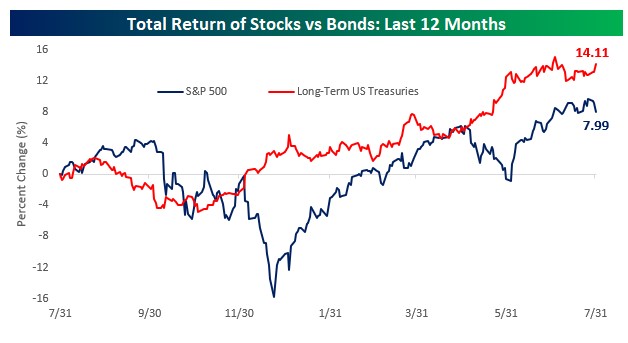 The message we take away from the chart is this:  diversification not only helps smooth the ride in financial markets, it also helps investors step back from emotion in a market that seems to be driven by headlines and tweets.