What Could the Rough Start to 2016 Mean?

Last week we hosted the first of our “Portfolios at Panera” series.  The last Thursday of every month at 8:00 a.m., we are reserving the Community Room at various Panera restaurants around Central Ohio to have a casual conversation about what is happening with markets and how it is influencing the client portfolios we manage.

We talked about a variety of topics last Thursday, but the biggest question on clients’ minds was

To start with some historical context, we discussed the chart below.  2016 now has the notoriety of having the worst 10-day start to a year in market history.  However, looking at some of the other worst 10-day starts to a year provides some hope.  History shows four of the five other bad starts had returns that were strongly positive the rest of the year.  The one exception was a big one though – the Great Recession of 2008 which is still a painful memory for most investors. 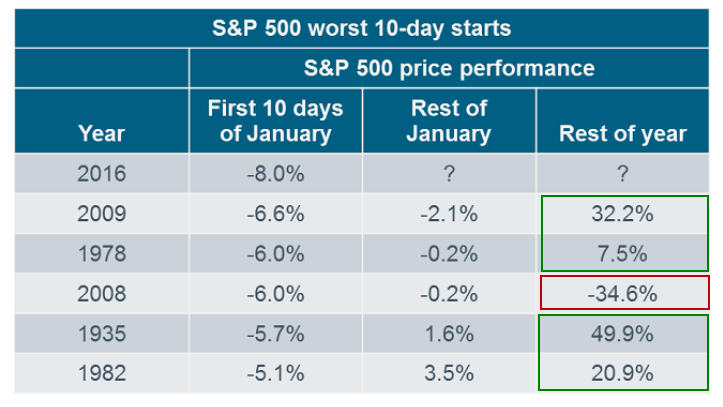 Seeing the chart above definitely provides a reason for optimism, but it also begs the question, could today’s market volatility turn into another 2008?  While we understand the fear, the today’s market environment is very different than the environment going into 2008.  Here are a couple of reasons why:

1.       It almost seems hard to believe but 19 months ago, oil was over $110 per barrel and the national average for gasoline prices was $3.70 per gallon.  Today, oil is trading around $30 per barrel and gasoline was $1.59 driving into work today.  Oil prices have collapsed, but the impact is extremely different than the decline in house prices which helped set off the 2008 recession.  First, energy makes up approximately 6% of the S&P 500 and although oil and gas drilling has produced big job gains the last few years, oil and gas extraction makes up less than 0.125% of the jobs in the U.S. economy (source:  Wall Street Journal, Bureau of Labor Statistics).  Second, unlike a drop in home prices, many U.S. consumers BENEFIT from a drop in oil and gas prices.  We’ve seen a bunch of conflicting statistics in the news about how much of an economic benefit there is to lower gas prices, but no matter how you slice the data, lower gas prices allow the general consumer to spend more, save more, or pay down debt.

2.     In retrospect, large amounts of leverage and lack of liquidity were the factors which contributed to the pain in 2008.  In 2007, Lehman Brothers’ leverage ratio was 31:1 meaning a decline of 3-4% in value of its assets would drive its equity value to zero.  Today, banks have higher levels of equity and significantly less leverage.  According to CSIMarket.com, the leverage ratio for global bank J.P. Morgan was 8.84 as of 9/30/2015 which was a new company low.  With prices so low, it is inevitable for some oil and gas exploration companies to default on their debts or go out of business, but banks are in a much healthier position to handle it compared to 2008.  Fears of some energy companies defaulting on their debts are reasonable – fears of a collapse of the banking system ala 2008 are not.

With the stock market correction, the other big question on investors’ minds is whether the economy might see a recession.  Economist Paul Samuelson once famously quipped: “the stock market has called nine of the last five recessions.”  We agree there are reasons for concern – economic growth is clearly slow with the U.S. economy only growing 0.7% in the 4th quarter and manufacturing activity in the U.S. is contracting.  However, those negatives are offset by positive recent data – stronger consumer confidence, rising home prices, and robust employment numbers.

The last day of January, stronger economic and earnings releases set the backdrop for the Dow rising over 372 points on the day.  The rise helped recover a portion of the decline from earlier in the month and was a good reminder, like the chart of the “worst starts in history,” that what goes down quickly can also go up quickly.

Check out this article's companion entitled, A Goal for the New Year? Show Up..