> Wealth Notes > Inform > What is the Swedish Model?

What is the Swedish Model?

This week, COVID-19 is back in the news as certain states have seen a rise in positive cases even as the overall U.S. positive testing rate declines. The chart below provides some context. Even though the percentage of COVID-19 tests with a positive result continues to fall across the U.S., states including Arizona, Texas, and Utah, which had low rates to begin with, have begun to see a slight increase in positive cases. It’s worth noting the absolute numbers are small compared to levels seen in April and May, but the tick up in percentages has attracted the attention of the media and the markets. 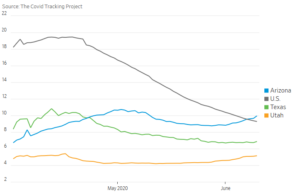 The major concern for markets is whether the U.S. might re-implement lock down measures after making progress on reopening. A term we keep hearing from multiple research sources is the “Swedish Model.” In Sweden, rather than implement draconian lock down restrictions, the country tried to keep a lid on COVID-19 while keeping their economy open. Sweden implemented social distancing rules, but kept restaurants, salons, shops, and schools open. Only gatherings of more than 50 people were banned.

The “Swedish Model” has been both celebrated and criticized by various media sources. According to John Hopkins University data through early June, Sweden’s COVID-19 infection rate was lower than that of other European countries which implemented strict lock downs; however, the per-capita death toll, especially among elderly and nursing home residents, has been among the highest in the world (4,542 deaths in a country of 10.2 million people through early June).

We are bringing up the “Swedish Model” because we think it has important implications for how the economy and markets may handle a tick up in virus cases. The working idea is to keep the economy open, but take special care to protect at-risk populations. In other words, learn both from what Sweden did well, and what they did not do so well.

Earlier today we received a research report from BCA (Bank Credit Analyst) Research with the headline below:

According to BCA Research, the relaxation of lock down measures coupled with mass protests have made a second wave of the pandemic much more likely. However, they believe “unlike the first wave, most governments will not shutter their economies in response to a renewed rise in infection rates.  For better or for worse, the “Sweden strategy” will become commonplace.” In other words, a rise in positive COVID-19 cases is unlikely to cause the same level of economic harm as the previous wave because economies are likely to remain open as we look to live alongside the virus.

The market implications of this view are important. Although we are likely to see volatility in the near term, particularly after the recent historic rally in stocks since the March 23rd low, the combination of low interest rates, monetary stimulus, and improving labor market conditions remain incredibly supportive of financial markets. BCA specifically notes in their report they believe the US dollar has entered a cyclical bear market which is supportive of commodities, economically sensitive equity sectors (like industrials and financials) and non-US stocks. As we look at portfolios, the key word being used in The Joseph Group’s investment strategy meetings is “optionality.” We are looking to add to strategies which give us the opportunity to participate on the upside from an economic/earnings recovery, but provide a measure of downside protection.

We’re thrilled to see economies opening, but the recent tick up in cases is a reminder the impact of the virus is going to be with us for a while and we do not take it lightly. Members of our team as well as clients have had family and friends who have been personally impacted by COVID-19, and although our job is to be logical about the economic impact, we are deeply saddened by the human impact. Reopening is not a time for complacency. We may not like it, but taking precautions with cleanliness and distancing continue to be a way to support great lives – both our own and the lives of others.

We continue to stay focused as things develop and we hope communicating what we are thinking and doing in portfolios will provide a measure of calm in these times. If you can, get outside and enjoy some lovely Spring weather!

Check out this article's companion entitled, Are You Just Awake, or Truly Living?.