Earlier this week a capacity crowd attended our Portfolios & Pints event and we pulled topics out of a German hat (with a feather in it) to discuss with the audience.  We covered current events such as the inverted yield curve and Chinese currency devaluation as well as big-picture topics such as The Joseph Group’s views on using active vs. index funds.  One current event topic which garnered interest was the proliferation of negative interest rates around the globe.  It isn’t supposed to work this way – bonds shouldn’t have negative yields because after all, you don’t pay someone to take a loan from you.  However, as the chart below shows, the dollar value of bonds across the world with negative interest rates is growing, especially over the last few months. 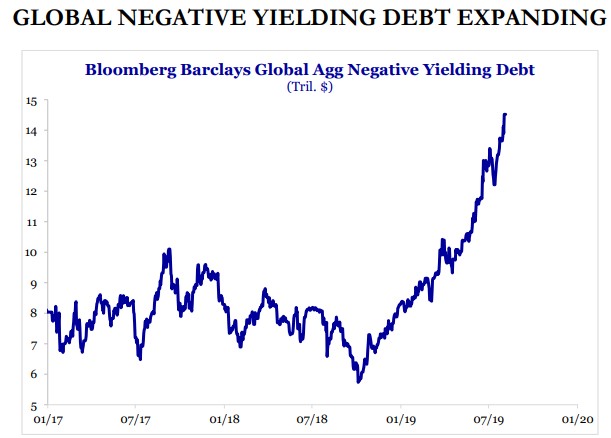 We believe negative interest rates at Central Banks outside of the United States is one of the key starting points for negative interest rates in the global bond market.  While the Fed Funds rate here in the U.S. is 2.25% (but expected to decline in September), The European Central Bank (ECB), the Swiss National Bank, the Bank of Japan (BOJ) and others have pushed short-term rates to zero or below in an effort to stimulate lending and economic growth.  To wrap your head around the concept, think about a checking account that charges fees – you aren’t earning any interest, you are paying fees to the bank which means your effective interest rate on your deposit is negative.  In the view of Central Banks, if it is costing investors to keep money at the bank, maybe they will do something else with it such as make loans, invest in capital projects, or buy corporate bonds or stocks.  Negative interest rates at Central Banks are an experiment in economic stimulus.

Just as the Fed Funds rate influences interest rates on bonds here in the U.S., policy rates in other countries influence the rates on their bonds.  According to Charles Schwab, over 40% of the negative-yielding bonds in the world come from Japan, with the rest from various European countries.  When you consider the fact that some institutions such as banks are required to hold government bonds for regulatory reasons, it’s just not that simple to stop buying bonds even if the yields are negative.

So what are some of the potential implications of negative interest rates?  Here are three which we discussed at this week’s Portfolios & Pints event: