Why Aren’t Stocks Down More?

Close your eyes…imagine yourself a year ago at this time. It was May 2019, the high temperature in Columbus was 82 degrees and the S&P 500 was within a few dozen points of where it is today. Then, our biggest worries were trade concerns with China. Today, at similar levels in the S&P 500, we are in the midst of a global pandemic with economic activity on ice. The question you may be asking, and one many of us are hearing is “why aren’t stocks down more?” The month of April was the best single month for the S&P 500 since 1974. 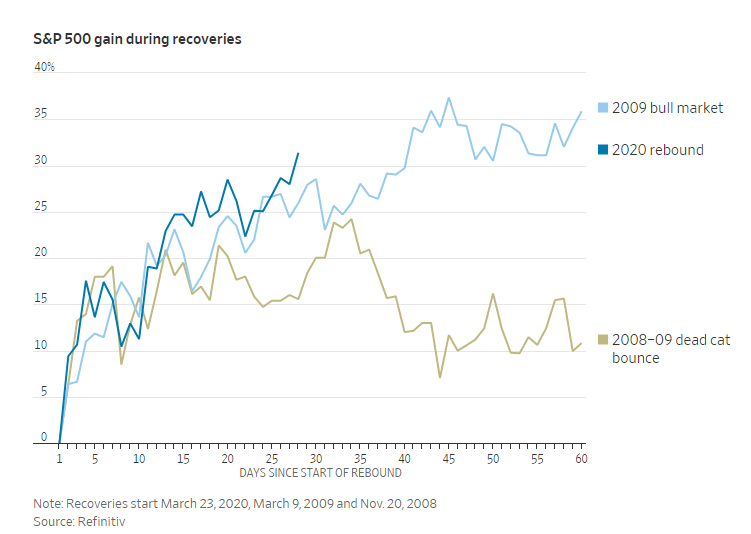 To start, it is helpful to think about what the market is, and what the market isn’t. A popular saying among market commentators is “the market isn’t the economy”. What folks mean when they say this is the market behaves differently than the economy and on different time tables. The easiest way to think about this is to think of the market as a forecasting tool. The market is forward-looking and less interested in what is happening today, but rather it is more interested in what is happening in the future. In March there was considerable concern about the future health and economic well-being of Americans. The market reacted to this concern by selling off at a frightening pace. Today, a little over a month from the lows this year, the market is up over 30% off the bottom. What changed? Haven’t more jobs been lost? Haven’t lock downs been extended in some areas? The answer to those questions, of course, is yes. We have, on the other hand, gotten more clarity into the spread of the virus, treatments that may be effective, and positive news on the vaccine front has been in the news. The market had much less clarity into those issues a month ago than it does today.

Aside from relatively positive news on COVID-19 the disease, one of the other key underpinnings to this rally has been the flurry of government action not only in the U.S., but around the world. The size and speed with which these actions have taken place is unparalleled in history. Central banks have not only slashed interest rates, they’ve begun buying all sorts of bonds to protect the liquidity in fixed income markets. While central banks have been busy, governments around the world have been flexing their fiscal muscle, injecting massive sums of money into corporate coffers and consumers’ bank accounts. We can debate the prudence of these actions when the dust settles, but for now it’s clear this has put a short-term floor into markets. There is no guarantee this floor isn’t breached, but it is no coincidence that the market bottomed the same day the Federal Reserve said it would be buying corporate bonds and providing other liquidity measures to areas of the market. To put into perspective just how quickly policy makers have acted, the chart below shows the fiscal response to the Coronavirus Pandemic compared to the response to the Financial Crisis of 2008 and the time it took to implement that response. 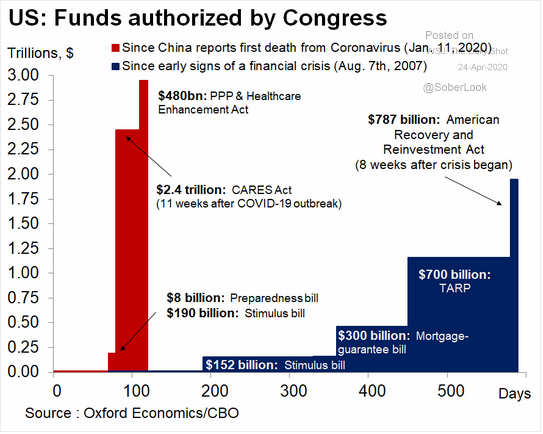 It’s possible we’re at a crossroads. As we gain clarity on how coronavirus affects people and best ways to treat it, we wait for clarity on the economic effects of what the IMF is calling “The Great Lockdown”. To that end, we remain vigilant here at The Joseph Group. I’ll repeat something our CEO and CIO Travis Upton wrote in this space several weeks ago. It is that effective mindset, called the Stockdale Paradox that states, “You must never lose faith that you will prevail in the end –which you can never afford to lose – with the discipline to confront the most brutal facts of your current reality, whatever they might be.” We’re confident there is a path out of this, but are realistic about the economic effects in the meantime. Count on us to continue doing what we do. Now, more than ever, it is important to us that we help our clients continue to live great lives, one story at a time. 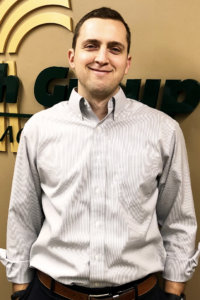 Check out this article's companion entitled, Our Roles: To Protect, Provide, and Teach.