Will the Buck Stop Here?

Earlier this week, we ended our 2016 monthly series of “Portfolios at Panera” talks with a market recap event at The Joseph Group’s offices.  We reviewed each major asset category and talked about “What did we do (in portfolios in 2016)?” and “What is our view (outlook for each asset class in 2017)?”  One of the items we discussed was the underperformance of foreign stocks relative to U.S. stocks since the election and the answer was surprising.

Prior to Donald Trump winning the Presidential Election, momentum in the World stock markets was clearly with foreign stocks.  Following the short-lived effects of “Brexit” in June, the MSCI EAFE (Europe, Australasia, and Far East) index of developed market foreign stocks outperformed the S&P 500 in the 3rd quarter (July – September), but that momentum stalled on election day…or did it?

From a fundamental standpoint, the case for foreign stocks is strong – valuations are cheaper than U.S. stocks and economic growth/manufacturing activity across the Eurozone and Japan has been accelerating.  Improving growth on the back of attractive valuation is usually a recipe for strong stock performance…and in the case of foreign markets, it actually has been.

Skipping to the punchline, ALL of the recent underperformance of foreign stocks since the election can be attributable to the spike in the U.S. Dollar.  Below is a table showing the rolling 1 and 3 month returns for the S&P 500 and the MSCI EAFE returns in dollar terms (shaded in blue).  It’s clear from the numbers the S&P 500 has significantly outperformed.  However, the third row shows the performance of the same MSCI EAFE index in local currency terms.  Showing local currency index returns allows us to strip out the impact of the U.S. dollar and look purely at stock performance.

In terms of pure stock performance, the MSCI EAFE has actually OUTPERFORMED the S&P 500 over the recent rolling 1 and 3 month periods.  However, U.S. investors have not felt those gains as that performance has been offset by an over 8% spike in the value of the U.S. Dollar.

Will the strength in the U.S. Dollar continue?  The post-election surge has taken the U.S. Dollar to its highest level in 14 years versus a basket of other currencies.  There is a joke in the investment industry that when a trend appears on a magazine cover, the trend is about to change.  With that in mind, we were struck by the December cover of The Economist magazine talking about “the mighty dollar.” 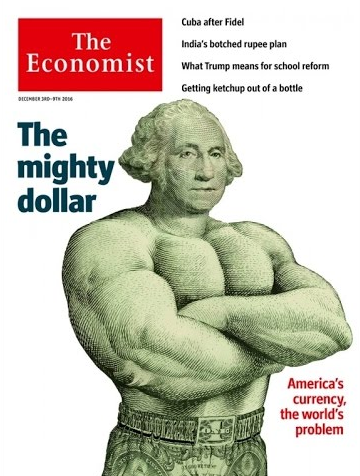 In their 2017 Outlook call, Ned Davis Research stated their view on whether dollar strength would continue: “on a purchasing power parity basis, the Dollar is overvalued against all of the currencies.  It’s an overbought and crowded trade.  A lot of good news is priced in – we would be suspicious if we got much more of a move higher in the Dollar.”

If Ned Davis is correct, Dollar headwinds could turn into Dollar tailwinds for foreign stocks in 2017.

Check out this article's companion entitled, Christmas in an Envelope.