> Wealth Notes > Inform > Will The Fed Cuts Rates This Year? The Fed May Say No, but the Market Says Yes.

Will The Fed Cuts Rates This Year? The Fed May Say No, but the Market Says Yes.

Late last year, the idea the Federal Reserve might actually CUT interest rates in 2019 seemed like an impossibility.  After all, the Fed increased short term interest rates in December of last year and economists widely expected the Fed to continue to increase rates by as many as 3-4 times in 2019.  Expectations for rates hikes shifted after a sharp market correction last December and the Fed changed their stance to be “on hold” with rates, which was a boost to investor confidence.

Despite the Fed implying they will be “on hold” and keep rates steady, the market is saying the Fed needs to change their stance again and this time, they need to cut interest rates.

The chart below shows the “Market Based Probability of a Rate Cut in 2019.”  Think of the red numbers on the chart as the percentage likelihood (the odds) of a rate cut.  In late 2018, those odds were essentially zero.  In April, those odds increased to over 70% and have hovered between 70% and 80% over the last few weeks.  It is worth noting the chart reflects the probability of one rate cut, but we’ve seen research suggesting as many as three cuts this year. 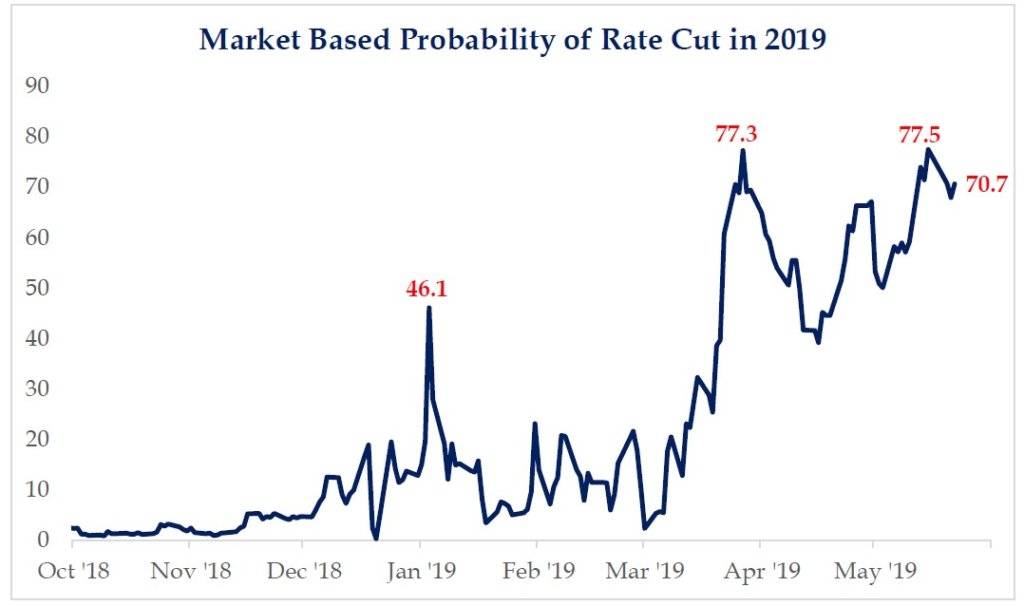 Despite the market probabilities, we believe the path to the Fed actually cutting rates could be a struggle.  On one hand, the bond market is clearly telling the Fed they need to cut.  The fact rates on 3-month T-bills are currently 2.36% (as of May 30th) and the rate of 10-year Treasury bonds is lower at 2.25% says something is not quite right in the economy thus resulting in an “inverted yield curve.”  However, with 1st quarter U.S. economic growth at 3.1%, the Fed can argue the economy is strong and there is no need to cut.  Also, we’re not big political conspiracy theorists, but the Trump White House is calling for cuts to further stimulate the economy, especially to offset the U.S. impact of tariffs.  We can see the Fed wanting to avoid the criticism they might endure for “caving to Trump pressure” if they did cut rates which may keep the Fed on hold longer than the market wants.

The bottom line is there is a mismatch between the Fed and market expectations, and it could be a volatile market road before the mismatch gets resolved.  This is one factor that has us leaning neutral to defensive in our allocations within many of our client portfolios.

Check out this article's companion entitled, A Yellow Bus Utopia.