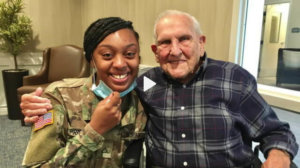 This weekend is a time to remember the many lives lost twenty years ago on 9/11 as well as their family members and the many first responders. We recall with gratitude the great sacrifices made and the sacrifices that continue to be made to help ensure that such an event never happens again.

There are many ways to express gratitude to those who have served our nation. In this issue of Wealth Notes, we share the touching story of a young girl’s thank you letter to a WWII veteran  – which is now his most-prized possession. A feature of last Sunday’s CBS Sunday morning, below are excerpts from a written version of the featured story, authored by Steve Hartman, one of the show’s writers and published on September 3, 2021.

Frank Grasberger keeps his most prized possession close. Other than his wife Delores, almost nothing matters more to the 95-year-old than a note that he carries everywhere. “I’d never be without it because it’s so special that somebody thought of me that much.” His wife added, “when he has that letter with him, he has a feeling of faith, trust, and love.”

The Strongsville, Ohio, resident is a World War II veteran and back in 2009, a third grader wrote to thank him for his service. “If it wasn’t for you, we would never have freedom. I’m so happy you made sacrifices. Your friend, Dashauna Priest,” the letter said. 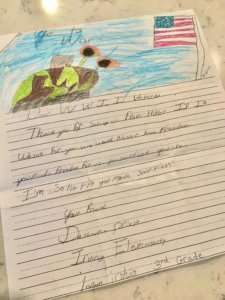 To Grasberger, that simple thank-you came to symbolize a life well served. And it meant so much that he wanted to thank the author. “But we never could find her. Before I close my eyes I want to find her. I have to find her.” Just about everyone who works at the senior living residence where Grasberger lives was well aware of his attachment to the letter and his decade-long desire to find the girl who wrote it. So the staff did some sleuthing and were able to find her!

Priest, now 21 and a member of the National Guard vividly remembers writing the letter as a school assignment because she so admired people in uniform. It was an honor to write the letter, she said.

The staff arranged for Priest to surprise Grasberger last month  – showing up at the residence wearing her National Guard uniform. Frank initially was speechless and later shared, “you can’t imagine the feeling I had when she stood next to me. It just took my breath away, it really did,” he said. Delores thought to herself, ‘where’s are his heart pills?’ because this is it – this is going to be the big one!”

Fortunately, Grasberger’s heart only swelled with joy. And it may never return to its old size. Priest said Grasberger is now family. “There’s love there for her, deep down in my heart. She’s like my third daughter, she really is,” Grasberger said. “It started with a lot of love and affection,” Delores said, “And it’s ending the same way.”

Most of us can’t express gratitude directly to the families of the victims of 9/11. But perhaps as a way of remembering them and honoring their sacrifice, we each can find someone in our own lives who has made great sacrifices for us or others. Reach out and thank them – remind them that what they have given is deeply appreciated.

Gratitude – it’s such an important part of living a great life.

Check out this article's companion entitled, Back to School on Health Savings Accounts: Distributions & Strategies.