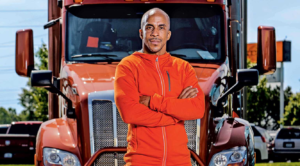 What do you do with a philosophy degree from Yale? That’s easy – become a cross-country truck driver.

Seem a bit strange? Well that’s exactly what Tony Blake did back in 1993. One of the best African-American swimmers in the history of the Ivy League, when Tony failed to make the U.S. Olympic team by eight-tenths of a second, something seemed to die inside. He left Yale without graduating and for 15 years traveled the world on a personal and spiritual journey, working odd jobs in Europe, the Caribbean and Africa. Tony did return to Yale to finish his degree and then worked for a few not-for-profits. But he soon returned to Africa to learn more about his heritage and took a new name, Siphiwe Baleka.

By 2008 Siphiwe was in his mid-30’s and tired of scraping by. He couldn’t imagine a 9-5 desk job so instead signed on with Prime as a cross country truck driver. He liked the nomadic lifestyle, enjoyed seeing America and made good money. His plan was to drive for three years and save a lot of money before moving on to a more fulfilling career. But only three months in, he happened to look in the mirror – his face looked fuller. He got on the scale and wham – he saw that he had gained 15 pounds. At 5’8” Siphiwe had always been a lean 140 lbs. Now he was 155 lbs. and realized he was horribly out of shape.

Siphiwe had read of the health risks of cross country driving – the long days and constant sitting led to obesity, depression and heart disease. Always a goal setter, he immediately made a commitment to get back in shape. Anytime he had a few minutes on the job, he worked out:  burpees, mountain climbers, jump-tucks. Beside his truck at rest stops he’d do each exercise at high intensity for 20-60 seconds, rest for 10 seconds and then repeat. When waiting in line at the truck depots for his next assignment, he’d do squats and shadow-box. His fellow truckers laughed at him and he became a running joke over the CB radio. He didn’t care, he was getting back in shape and feeling better each day.

But something else happened as well. Some drivers would come up to him and say that they too needed to get back in shape and could he help them learn a few exercises. He was glad to pass on his training techniques and nutrition tips too. The more he coached them the more he realized his new routine wasn’t just for him – it was meant to help other people find their way to health. There was a real need and perhaps a business opportunity.

Siphiwe decided to draw up a proposal to become the in-house health and fitness coach and presented it to Robert Low, founder and president of Prime, who was all for it. Siphiwe then studied corporate wellness programs and developed a 13 week program for the fleet. Interested drivers had to fill out an application and come in for a day of orientation. The results were immediate. The average weight loss in the first group was 19 lbs. and in his second group, a driver lost 60 lbs. in the 13 weeks.

The program has grown rapidly. Drivers now use an app to log everything they eat and drink. Once a week Siphiwe analyzes those logs to identify what foods might be doing damage to their metabolism and then counsels them on how to fix it. Drivers and their families are coming back to Siphiwe, grateful for what he’s doing to help them. And as he shared in this interview “I’ve never felt more fulfilled.” What a great story!

Perhaps you or someone you love is working in a job that doesn’t inspire or fulfill them. Before letting them leave it, help them explore ways they can help their employer and their fellow employees, doing something that they’re passionate about and that meets a need. Or perhaps you’re already retired but not finding enough to do that is worthwhile. Use Siphiwe Baleka’s transformation as inspiration to make your own.

What do we call the intersection of one’s passion and skills with a need in the world? We call it living a great life, one story at a time. Go for it – you’re made for greatness!

Source:  This Truck Driver Got Fit and Then Got Busy Helping Other Truckers, Guideposts.org