> Wealth Notes > Inform > A Conversation with “Chris” About Markets and Ukraine

A Conversation with “Chris” About Markets and Ukraine

As you can imagine, we’ve had a lot of conversations about markets, the war in Ukraine and our thoughts on the direction going forward.  For this “To Inform piece, “Chris” is a fictional character based on an amalgamation of clients and friends we have had recent conversations with. Why “Chris”? While we aren’t seeking for the character to line up with a particular person, longtime TJG team member Chris McConaughy is going to be leaving our team at the end of March as he becomes Associate Pastor at Veritas Community Church in the Short North. Using the name “Chris” is just one way to honor our Chris and the contribution he has made and continues to make at The Joseph Group.

While the discussion here is light and is meant to be fun and readable, our prayers continue to go out to the Ukrainian people.

Chris: So I know markets have been down, but foreign stocks must really be getting hammered!

Chris: But the war means the Dollar is likely to keep going up, so we should avoid foreign stocks, right?

Travis: One thing we are aware of is when the Federal Reserve starts hiking interest rates, the dollar has a historical tendency to decline. It’s kind of a “buy the rumor, sell the news” sort of thing. Here is a chart showing the historical pattern along with what has happened with the dollar over the last few months.

Chris: Interesting. So, if a declining dollar is supportive of foreign stocks and the dollar tends to turn when the Fed starts hiking interest rates, when would I want to own foreign stocks?”

Travis: Right now. The Fed meets next week and Fed Chair Powell has already suggested he will recommend the Fed increase interest rates by 0.25% with it being the start of multiple hikes to come.

Chris: Interesting. Wait, did you say all of the indexes were down about -10%? My stock fund is down more (down less) than that. That fund manager must be an idiot (a genius).”

Travis: Let’s look and see if the stock fund leans toward growth (think technology) or leans toward value (think dividends, industrials, financials). There has been a big difference in performance between growth stock and value stocks. So far this year, growth stocks have done worse than the index while value stocks have done a little bit better. Growth companies such as internet retail, software, and computer chips have done worse than the index and in the last couple of months this trend of growth lagging has played out all over the world. So, before you call your fund manager an idiot or a genius, it would be good to understand whether they are more of a growth manager or a value manager to make a more educated decision.

For example, we have a foreign stock manager who is doing a bit worse than the EAFE in the Harvest portfolio so far this year, but they are a growth leaning manager and are better than the top quartile of their category this past year with a long-term record of success. We think they are a keeper.

Chris: But if value is doing better, we should dump all of our growth stocks and buy value stocks?

Travis: We’ve talked about that A LOT in our Investment Strategy Team meetings. Technology companies in particular have had strong earnings and corporate insiders have increased their buying, which is usually a good sign going forward. We don’t want to dump growth managers but we do want to own both growth and value in portfolios.

Chris: Wait, did you say corporate insiders? Would you consider them “Smart Money?” Don’t you sometimes talk about that Smart Money/Dumb Money chart? What is that saying?

Travis: Yes! The Smart Money/Dumb Money chart is probably the chart we most frequently get questions about. Corporate insiders would be part of the group you would consider Smart Money and although I don’t love the term, Dumb Money refers to individual investors who tend to make more emotional decisions. Here’s what that indicator shows through March 9 – it shows the Smart Money is very optimistic going forward while the Dumb Money is not. When there is a big gap between the behaviors of the two groups, historically it has lined up with some key market tops or bottoms. 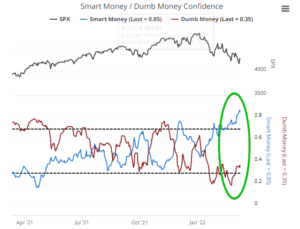 Chris: Interesting. So what does your crystal ball say about the future?

Travis: I think we all wish we had a crystal ball that knows the future, but we can look at the past for key insights. Below is an interesting chart The Joseph Group investment team passed around earlier this week. It looks at the path of the S&P 500 this year compared to 1982. Why 1982? It was a mid-term election year, a year of high inflation and oil prices, and a year when Russia, especially in the months of February and March, was a major issue. Sounds familiar, doesn’t it? 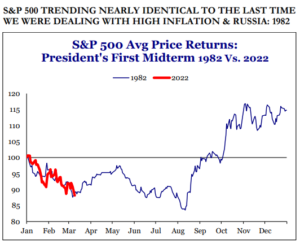 Chris: Wow, uncanny. But that was 40 years ago! Things are a lot different now than 40 years ago.

Travis: Oh, we totally agree. But the reason why we appreciate the historical analogies is because even though the economics may be different, investor psychology, which has a big impact on short-term market movements, tends to be similar. That’s why history tends to rhyme.

Chris: Well if the market moves like it did in 1982, it looks like we could have some more choppiness ahead. Why would your so called “Smart Money” be buying?

Travis: The Smart Money/Dumb Money label is somewhat inflammatory…another way to look at it may be short term thinkers and intermediate-term thinkers. The more emotional investors are following today’s headlines while the institutional investors are taking an intermediate-term view of corporate profits. The so called “Smart Money/Dumb Money” groups are thinking in different time horizons. Take the 1982 comparison chart as an example. The Smart Money doesn’t care about what the market is doing next week because they are more concerned about what may happen this Fall. On the other hand, the constant barrage of headlines forces individual investors to look day to day.

Chris: Huh, I’ve never thought of it that way. One other big question though. You say “intermediate term” …couldn’t this spike in oil prices and commodity prices spark a recession?

Travis: Again, this is something we are talking about A LOT in our Investment Strategy Team meetings. We’ve focused on three key indicators which would be recession red alerts. Here is a table of what we are looking at and where we are now:

Chris: Man, you guys look at a lot of stuff!

Travis: We do…it’s fun…most of the time…(smiles)…we take this stuff and managing objective-based portfolios on behalf of our clients seriously.

Chris: I don’t know if I followed all of this, but it sure is interesting. Is there a way I can learn more about what you guys are doing and thinking?

Travis: Yes! I’m so glad you asked! We’re getting back to in person events. Next Tuesday, March 15 we are having a Portfolios at Panera event in Dublin, starting at 8AM (you can register here). Then, on Thursday, April 24 we are having a Portfolios and Pints event at the Hofbrauhaus in Grandview. If you aren’t in Central Ohio though, don’t worry, we are still having Zoom-based Portfolios at Your Place events. On Tuesday, May 24, we are having former TJG team member and current Managing Director of the CAIA (Chartered Alternative Investment Analyst) Association, Aaron Filbeck as a special guest and I am going to interview him to talk about alternative investments and building portfolios. I’m excited to interview Aaron (who I have known since he was 7 years old) and it’s going to be a good one.

Chris: Wow! Thank you for all you do to keep us informed!

Check out this article's companion entitled, What Would You Like Me to Do for You?.