> Wealth Notes > Inform > Are We in a New Bull Market? A Look at Both Sides

Are We in a New Bull Market? A Look at Both Sides

An up or down move of 20% is commonly used to define bull and bear markets. By that definition, the NASDAQ index, which is heavily weighted toward technology stocks, is in a new bull market. The NASDAQ index hit a low of approximately 10,646 on June 16 and traded at 12,854 on August 10…the quick math is a bounce of +20.7%. Now, for perspective, the NASDAQ is still down over -18% year to date (YTD), but at one point the YTD loss was well in excess of -30%…the bounce is certainly welcome to most investors.

The $800 million-dollar question is of course, will the rally continue or is this rally just having a bear market bounce? Let’s look at some points on both sides.

We’ve looked at A LOT of arguments for the current rally being simply a “head fake” or a “bear market bounce” and there are two key recurring themes – concerns about earnings and concerns about interest rates. 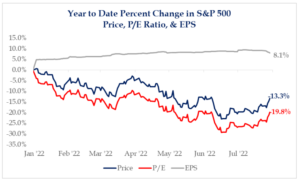 The concern is as the economy slows, future earnings may come down sharply. If we see a decline in the E, the denominator of the P/E fraction, stocks start to look a whole lot more expensive. The chart below looks at projected earnings for the S&P 500 in 2023. Estimates are coming down, although so far the decline in projected earnings is about -2.5%, which we think is pretty small when contrasted with the magnitude of this year’s market decline. The dashed line at the bottom represents Strategas’ estimate of where earnings could fall…if they are right, the projected earnings decline would be a bit more than -7%. If earnings fall, it gets a lot harder to justify higher stock prices. 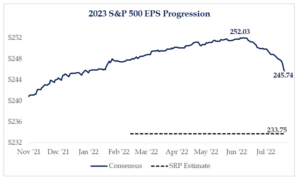 So we’ve looked at the bad news, what’s the good news? We believe there is actually quite a bit, but we will focus on two things we believe are influencing the recent rally – peak inflation and seasonality. 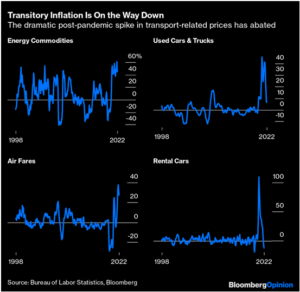 And although prices at the grocery store remain stickily high, prices at the gas pump have come down and we are seeing a commensurate bump in consumer confidence. It’s still early, but signs of inflation coming under control are definitely good news for investors. 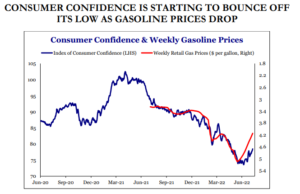 We remain struck by how this year has been similar to the mid-term election years of 1970 and 1982…the historical circumstances “rhyme” and both were years of sharp market declines, but also sharp recoveries in the final few months of the year. 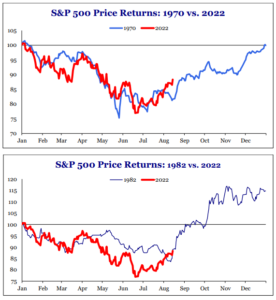 We always want to evaluate market data in the context of client objectives. That said, as we look to position the objective based portfolios we have the privilege of managing for clients in the current environment, there are a few more bright spots than there were a couple of months ago.

Check out this article's companion entitled, Rest and Recharge.