Beware the Ides of March?

The global stock market has had a terrific start in 2019, with the MSCI All Country World Index returning over 7% in January and adding to those gains in February.  The key question on investors’ minds is “will the stock market gains continue?”

As we discussed at a recent “Portfolios and Pints” event, there has definitely been an improvement in multiple areas of the economy and markets.  Not only has the Federal Reserve calmed fears with their willingness to be “patient” with raising interest rates, but we have seen notable improvements in credit conditions (the banking system looks healthy), consumer confidence is rising, and recent price increases of industrial metals (like copper) could be a sign that global economic activity is reaccelerating.

Looking forward, the backdrop is good for stock market gains to continue, but the pace of those gains is likely to slow relative to the first two months of this year.  In the near term, there are three critical dates and events in March that could have market-moving implications: 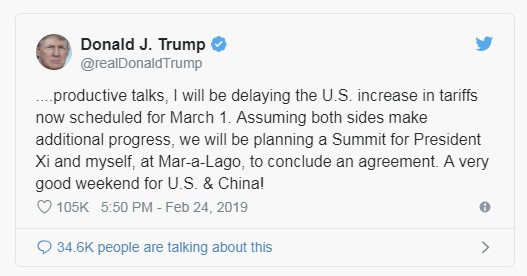 The month of March has the potential to be even more news-worthy for markets than usual.  As we approach March, we’ll be staying tuned to the potential news surprises – positive or negative – from the events themselves, as well as any shifts in sentiment/psychology on the part of investors.

Check out this article's companion entitled, The Power of Perseverance.