The past week has seen two major economic data releases. First, January’s jobs number was much better than expected. Payrolls increased by +467,000 jobs which was higher than virtually every economist’s forecast (which ranged from -400,000 to 250,000). Upward revisions to prior months’ data only strengthened the case the employment market is robust. Embedded in the numbers was a notable rise in the labor force participation rate (see chart below). One of the major challenges in the economy has been workers NOT re-entering the workforce, but January’s gain in labor force participation suggests this could be changing. While participation is still not back to where it was pre-pandemic, January’s number suggests people are coming back to work. 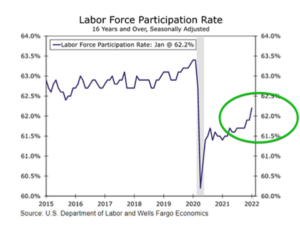 The second big economic data release was inflation. The U.S. Consumer Price Index also surprised on the upside with the headline rate increasing 7.5% year over year. This time, the increase inflation wasn’t lumped in just a few categories (like used cars). Inflation is broadening out with notable increases to categories like rent, apparel, and medical services. 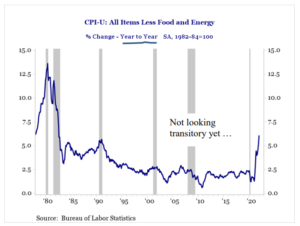 Perhaps the biggest implication of the strong/hot data is interest rates are going up. Markets are currently pricing in the Federal Reserve to increase short term interest rates 5 times in 2022 (see chart below) with the first rate likely coming in March. Longer-term interest rates (which are controlled by the market and not the Fed) are also increasing with the benchmark 10-year government bond rate rising above 2% for the first time in the pandemic. 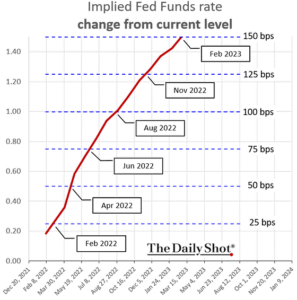 One the biggest questions we are getting from clients in light of the market digesting hot economic numbers and higher interest rates is “Does all of this mean a bear market is coming in stocks?” While volatility in the stock market is bound to pick up, history suggests the stock market can continue to move forward (albeit in choppy fashion). The chart below shows the annualized return for the S&P 500 in past Fed rate hiking cycles. The key here is that historically, rate hiking cycles happen when the economy is strong. With the exception of the early 1970’s (which suggests the Fed should NOT be raising rates in a recession) annualized returns for stocks during Fed rate hiking cycles going back to the 1950’s has been positive. 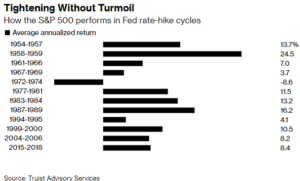 The numbers over the past week show the economy and inflation are running hot and Fed rate hikes are virtually certain to start next month. When it comes to stocks, choppiness is bound to increase, but history suggests looking more toward shifts in leadership (i.e. toward sectors like financials and energy as well as foreign stocks) rather than abandon ship.

Check out this article's companion entitled, Perseverance in Football and In Life.