As I write this, President Trump remains an outside shot to keep the Presidency. The situation remains fluid and thus I’ll stay away from what we don’t know (who will be inaugurated in January 2021) and stick to what we have a better idea of (Republicans hold the Senate and narrow the gap in the House). This forces us to think beyond this week – and arguably the rest of the calendar year – and to focus on 2021.

One of the biggest takeaways from election night was that again, the polls were wrong. Many polls showed a substantial lead for Biden and Democrats in House and Senate races across the country with whispers of a “blue wave” coming from many corners. What we witnessed on election night was by no means a blue wave. In fact, many hotly contested Senate races broke decisively in favor of incumbent Republicans. Senate races in Iowa, Maine, North Carolina, South Carolina, and perhaps even Georgia all look safe for Republicans, thus preserving the Republican majority for at least the first two years of the next president’s term.

Checking in on markets, stocks have rallied both in the US and abroad this first week of November, and appear to be digesting the somewhat uncertain expectations around election results with remarkable aplomb. As Warren Buffett once said, “in the short run the market is a voting machine.” In light of recent action, it’s helpful to ask, “What is the voting machine (the market) telling us?”

If you had the chance to listen to some of our pre-election calls, we covered a range of possible election scenarios. The scenario that looked somewhat likely, the “blue wave”, can almost certainly be ruled out. Such an outcome would have been a boon for infrastructure, renewable energy, and anything that could be tied to fiscal stimulus (consumer discretionary, small cap). A Trump win would likely have favored energy, defense, and financials stocks. Market action today didn’t really seem to favor the Biden trade or the Trump trade. The stocks expected to do well under a blue wave were down today (specifically infrastructure and renewable energy). Stocks expected to do well in the event of a Trump victory (financials, energy, defense) were also struggling today. The leaders were all in areas expected to do well under a divided government: health care, technology, and communication services. 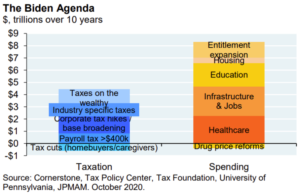 How do we make sense of all of this? Our best guess is that the implications of a Biden Presidency with a divided legislature can be summed up as follows: less stimulus (Republicans in the Senate have shown some reluctance for another blockbuster stimulus package, favoring more targeted relief), and more gridlock (some of the ideological goals of the left – higher taxes, student loan forgiveness, Medicare for All – appear to be pipe dreams at this point).

In other words, status quo. In this gridlock scenario it’s safe to assume that Biden’s proposed capital gains tax increases, shown below, are unlikely to be implemented. This is a net positive for stocks. Trade wars, a key policy plank of the Trump White House, may well very abate. This, on balance, is also a positive for stocks. The only negative from gridlock is the potential lack of a blockbuster stimulus package. This is, for an economy still on shaky ground, a negative for stocks. 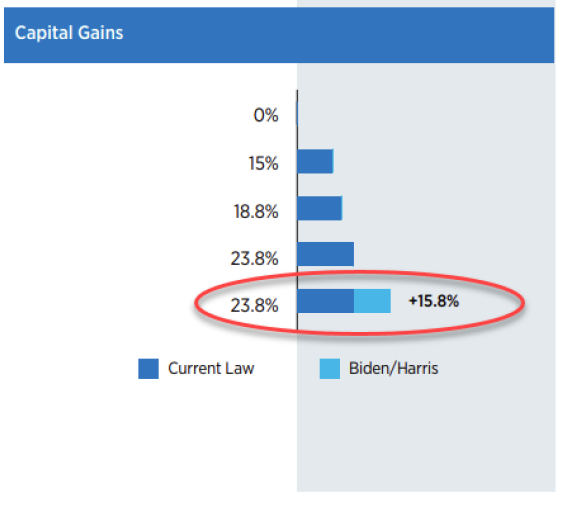 The days and weeks to come may hold more surprises for us. We’ll continue to see where the evidence leads and what the “voting machine” is saying. I’ll conclude with a shameless plug for our November Portfolios at Your Place event on November 19th at 4:00. We’ll continue unpacking the results from the election and hopefully help identify some of the key themes and ideas for the path forward as we move into 2021.

This WealthNotes article was written by Alex Durbin, Portfolio Manager

Check out this article's companion entitled, Improve Your Situation.