> Wealth Notes > Inform > From First to Worst: Is This a Buying Opportunity for Emerging Markets?

From First to Worst: Is This a Buying Opportunity for Emerging Markets?

In the first three months of 2018, only one major asset class had positive performance – emerging market (EM) stocks.  Since then, emerging markets have had a significant correction and are now down close to -10% year to date through late August.  Is the recent correction a buying opportunity?

Despite pressures from a rising dollar, trade wars (think tariffs), and a financial crisis in Turkey (side note:  Turkish stocks make up less than 1% of the MSCI EM Index), major global investment banks are suggesting investors should take a closer look at emerging market stocks.

Each month, Goldman Sachs publishes their Monthly Market Pulse which provides commentary and updates of their views of major asset classes.  There is only one asset class on their list which Goldman ranks as “Most Attractive” – emerging market stocks.  According to Goldman Sachs, “rising U.S. rates, recent dollar strength, and growing trade tensions are weighing on emerging markets (EM).  However, we would note that companies in the MSCI Emerging Markets Index derive less than 10% of their revenues from the U.S., and are trading at a 30% discount to the S&P 500.”  In other words, emerging markets stocks are cheaper than U.S. stocks and trade worries could be overblown. 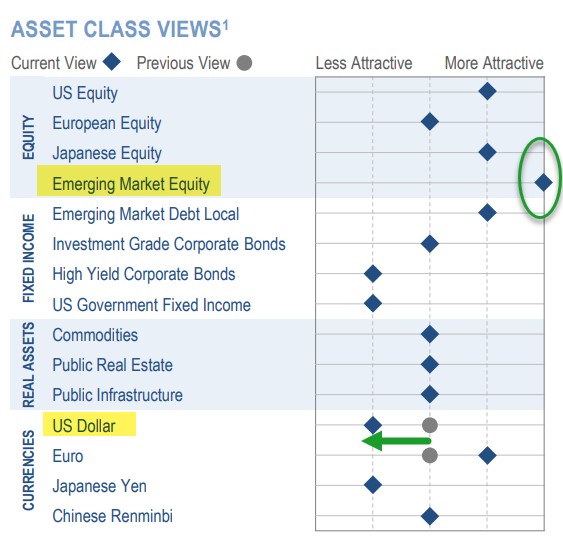 One of the big drags on EM stocks has been a rising U.S. dollar.  When we compare EM stocks denominated in U.S. dollars vs. the local currencies, we estimate about -5% of the YTD decline is directly attributable to a rising U.S. dollar.  Goldman believes this headwind will turn into a tailwind later this year.  Goldman states, “we have shifted our outlook to negative on the U.S. dollar…recent data releases appear to suggest global growth has rebounded…the dollar might be pressured by the global growth rebound at a time when the market consensus (on the dollar) is still long (positive).”

It is worth noting Goldman Sachs is not the only firm positive on the future for emerging market stocks.  In a recent release, JP Morgan noted “Our Global Equity strategists upgraded EM equities to overweight, taking advantage of the -9% YTD underperformance.  They believe the US dollar could start to reverse some of its recent strength, providing support to EM markets.”

After being up over +30% in 2017 and starting off with strong relative performance in the 1st quarter of 2018, investors had their interest piqued by emerging market stocks.  However, after a sharp correction this summer has weighed on performance, many investors are questioning whether EM stocks should still play a role within diversified portfolios.   We don’t claim to know what direction trade wars will go or what the next Presidential tweet might say, but we do believe “buying the dip” on attractively valued, growing assets, can be a winning strategy for long-term investors.

Check out this article's companion entitled, The Invisible People.