> Wealth Notes > Inform > Is the Upcoming G-20 Summit Something to be Thankful For?

Is the Upcoming G-20 Summit Something to be Thankful For? 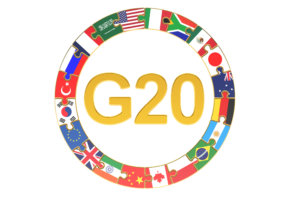 Earlier this week, The Joseph Group hosted our very first Portfolios & Pints at Land Grant Brewery.  Very similar to our monthly Portfolios at Panera, this was an opportunity to talk about markets and answer questions about what we are doing in client portfolios.

Starting a new evening gathering brought us back to January 2016 when we did our very first Portfolios at Panera event.  Similar to this week, the room was packed in 2016 at the Panera on Fishinger Rd. because investors were understandably concerned about markets.  Let’s revisit a little history of what was happening in January 2016:

You may be thinking, “wait, I thought you said January 2016…not what’s happening today!”  The similarities between the current market environment and what happened in early 2016 are uncanny.

So, what ended up happening after the market correction in 2016? After a volatile few weeks, stocks reversed higher in late February right around the time of the G-20 Meeting in Shanghai.  The G-20 Meeting was a gathering of Central Bank leaders and key policymakers from major countries around the world including the Fed Chair at the time, Janet Yellen. The takeaway from that meeting is simply that policymakers did not want the tightening financial conditions.  World leaders called for greater use of public spending to “revive a sluggish global economy.” (Source: LeMonde). Right around the time of the meeting, metrics reversed – oil rebounded, credit conditions improved, the Fed held steady on interest rates (they only hiked one time that year rather than the planned four), the dollar weakened and stocks rebounded.  Here is a chart of the S&P 500 during that time period: 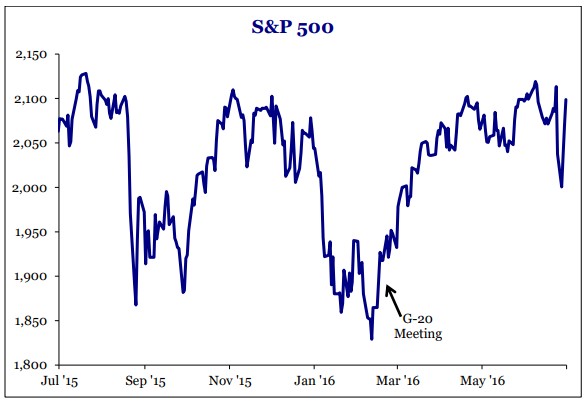 You may be thinking, “If the G-20 meeting could help change the direction of policy and do all of that, when is the next G-20 meeting?”  The answer:  next week.

On November 30 and December 1, the annual G-20 (Group of Twenty) Summit will be held in Buenos Aires, Argentina. The members of the G20 Summit include some of the largest industrial countries in the world, such as China, Japan, the European Union, and the United States. The Summit represents an opportunity for world leaders to discuss important global issues, one of which being global economic policies. All of these constituents represent 85% of the global economic output and 80% of the world’s investment landscape, so potential policy changes can have a significant impact on global growth. (Source: G20)

At the Summit, President Trump and Chinese President Xi are scheduled to have a private, one-on-one meeting where they are expected to discuss trade policies and attempt to come to some kind of trade agreement. If the U.S. and China are able to come to some kind of agreement, it could be positive for stock markets as a whole.  We’ve been intrigued that even in the midst of market volatility so far in November, emerging market stocks have been relative leaders ahead of the G-20 Summit.

We obviously don’t know the outcome of the 2018 G-20 Summit in two weeks, but we are watching for any signs of a trade deal between the U.S. and China. Now that the mid-term elections are over, we believe President Trump will begin to try to set the stage for his second-term election. Recent tweets from the President have indicated Trump and Chinese President Xi are already talking about terms.  We’ve said it before – in markets, history may not repeat itself, but it often rhymes.  The irony of starting Portfolios and Pints in a similar environment to when we started Portfolios at Panera is not lost on us and we will be staying tuned during next week’s G-20 Summit.

Have a Blessed Thanksgiving!