I’m sure all of us are tired of seeing trade talks pop up in the news, and wish it would be done already…too bad! In most recent news, talks between the U.S. and China have not completely collapsed, but tensions between both parties continue to escalate.

A quote from Brian Westbury, Chief Economist, and Robert Stein, CFA, Deputy Chief Economist at First Trust Advisors showcase what is at stake between the two countries:

“Either way, if tariffs nick our economy, China’s gets hammered.  Last year we exported $180 billion in goods and services to China, which is 0.9% of our GDP.  Meanwhile, China exported $559 billion to the US, which is 4.6% of their economy.” (Source: First Trust Advisors)

There is a game of incentives at play. Recent U.S. economic data is looking stronger and stock markets are reaching new highs. In other words, the Trump Administration has a lot more ammunition in this game and Chinese officials have a much more meaningful incentive to work with the U.S. and make a deal. The longer a deal is delayed (and more tariffs go into effect), the more pain the Chinese consumer will feel relative to the U.S. consumer. 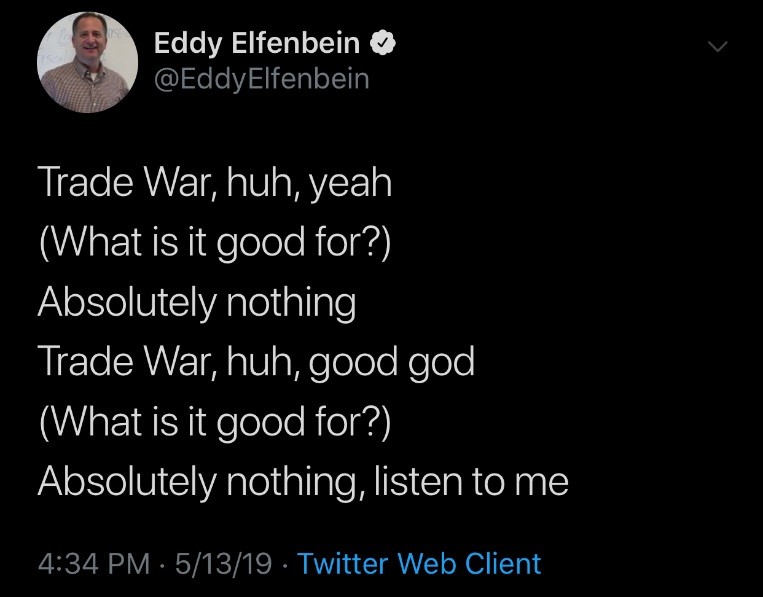 Twitter can be a very entertaining place at times, and this tweet was music to our ears. No matter how small the impact may be to either party, trade wars are a drag on economic activity and tariffs act as an indirect tax to consumers. If a deal were to fail, the implications for further tariffs or a full-on trade war could be more impactful than they are now.

In our allocation portfolios, namely Harvest and Provision, we continue to sit much closer to “neutral” relative to our strategic targets. We are not making large bets in the portfolios right now, rather we are looking for better opportunities to do so in the future.

Check out this article's companion entitled, Success from Struggle.