> Wealth Notes > Inform > October Was the Best Month for the Dow Jones Industrial Average Since 1976???

October Was the Best Month for the Dow Jones Industrial Average Since 1976???

With the turn of the calendar to November this week there was a headline I saw multiple places across the financial media – here is an example:

The popular Dow Jones Industrial Average (DJIA) of 30 stocks was up +14% for the month of October, for the best month in over 46 years. Now, we want to put out the caveat that the Dow is an index of only 30 stocks and other indexes such as the more broadly diversified S&P 500 was only up +8% for the month, and the tech-heavy NASDAQ was up +4%. But October’s rallies to stocks were welcome and trimmed year-to-date losses in what has been a difficult year. Investors may wonder, with everything feeling so terrible out there, how could the month be so strong? We have a few thoughts.

Inflation pipeline numbers show inflation is likely to head down in the months ahead.  When the ISM Manufacturing survey number was released earlier this week a key sentence in a research summary from Capital Economics caught my eye: “The bigger news is that, partly due to a slowdown in demand, price pressures in the goods sector have evaporated.” In other words, in the broader manufacturing sector prices for many goods have come down, which should in theory lead to a dramatic reduction in inflation. We can see further evidence of declining pricing pressures in the chart below. The fact the blue line (prices received from manufacturing firms) is coming down should imply the magenta line, or consumer price index (CPI) is likely to come down as well as we head into the new year. 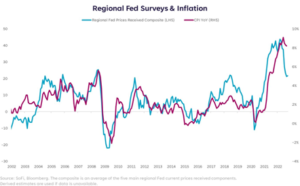 Corporate earnings have not been as bad as feared. According to Blaine Rollins, Managing Director of Hamilton Lane, heading into the 3rd quarter earnings season, “plenty of investors were worried about an all-out earnings crash. With the prominent exception of (a big tech/social media company), this hasn’t happened.” Rollins goes on to say, “Earnings are slowing which needed to happen. The reason this season has proven to be a positive catalyst for stocks is that earnings are NOT crashing.” We like to remind investors markets tend to respond to better/worse rather than good/bad. Even though earnings are weaker (which is bad), they are better than expectations, which in turn is a positive factor for markets.

Sentiment was showing negative extremes in October.  In our October 14th Wealthnotes we noted one of our favorite sentiment indicators, the Smart Money/Dumb Money indicator was showing the “smart money” at an optimistic extreme while the “dumb money” was at a pessimistic extreme. Historically, when the gap is that wide it is the sort of measure associated with excessive fear and a better long-term buying opportunity. In other words, markets tend to bounce when investors are the more fearful.

The market has been following the historic mid-term election year pattern. Historically, mid-term election years tend to be the most volatile within the four-year presidential cycle. While every mid-term year is different, on average going back to 1962, stocks tend to have an average intra-year decline of -19%, bottom sometime around October, and then rally into the end of the year with the average performance 1-year after the correction being about +32%. The pattern tends to play out regardless of which party is controlling or swinging the votes in Congress. So far, 2022 has been more volatile than the average mid-term election year, but the pattern similarity is uncanny. The chart below shows the historical pattern in dark blue with 2022 performance in light blue. Again, 2022 has been more volatile (the lines have different scales), but if history continues to rhyme, it argues for further market gains between now and year end. 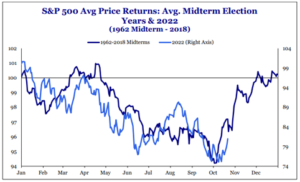 Zooming out from the day to day, inflation appears to have peaked, earnings are better than feared, and the market is in the early stages of what has historically been a favorable period for investors. Given everything happening in the world, we want to be ready for anything, but sometimes, that means being ready for some good news.

Check out this article's companion entitled, Impacting Lives through Soup.