One Step Forward, Two Steps Back

“One Step Forward, Two Steps Back” is perhaps the best way one can summarize today’s market conditions. Markets rallied from June to August on several factors, eventually rising almost 20% from the year’s low hit on June 16. Since then, the S&P has slid almost 10%. Why the tug-of-war? How long will we be in this stop-start kind of market environment?

To answer that question, we need to understand what is driving markets forward or, as we’ve seen recently, in reverse. This week’s “two steps back” can be attributed to August inflation data released on Tuesday. While headline Consumer Price Index inflation numbers showed a modest month-over-month increase of 0.1%, the story was below the fold. Measures of core inflation – inflation with the most volatile items stripped out –registered a much higher increase of 0.6% month-over-month, twice what economists had been forecasting. Several alternative measures that attempt to capture this concept of core inflation are shown below. 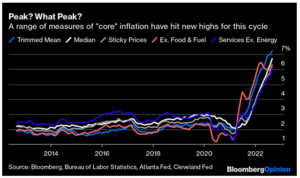 These data points are kryptonite for a Federal Reserve that has shown a willingness to do what it takes to tamp down inflation. As long as inflation remains at or near these levels, expect the Federal Reserve to continue on their path of raising the Fed Funds Rate.

It isn’t all bad news, and one of the things that seems to keep a floor under markets is the strong labor market. The monthly non-farm payrolls report released earlier this month showed that 315,000 jobs were added in the US during the month of August, after a blistering 526,000 were added in July and 293,000 in June. That’s 1 million jobs in 3 months! For a more real-time measure of the jobs market, we can look at weekly jobless claims numbers. Yesterday’s report showed 213,000 people filed for unemployment benefits, the fifth consecutive weekly decline after a slight rise earlier this summer.

Perhaps a result of the strong labor market, consumers remain willing to spend. Monthly retail sales released earlier this week showed an increase in spending of 0.3%, consistent with the idea that despite a slowing from the above-trend numbers we saw early last year, we remain firmly in growth territory. 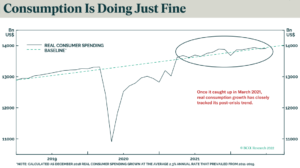 Positioning within client portfolios that we have the privilege of managing reflects this view. Stocks in certain defensive corners of the market look attractive to us. Bonds once again are compensating investors for the risk they take in owning them. Real asset investments, think commodities, infrastructure, and real estate are hedges against higher inflation. As long as economic data exhibits this sort of polarity one can expect a continuation of this tug-of-war in markets. Markets can break out of this “one step forward, two steps back” tango, but it requires certainty as to the direction of the economy and a better view on whether or not inflation has peaked. In such environments it is wise to remain aware of the risks without being blinded by them.

Check out this article's companion entitled, Stop and Listen to the Music.