We’ve written and talked about inflation a number of times over the past several months. For a period in early 2020, inflation was the least of anyone’s concerns (most strikingly when the April contract of WTI Crude Oil went to -$40 a barrel). We’re not yet at levels of inflation where one must be alarmed, but we are beginning to see a necessary precursor, reflation (defined as the recovery to the price trend) in several places.

The accompanying chart of food prices is instructive. Last hitting a peak in the early 2010s, this index went on to decline precipitously until the beginning of 2016. This negative trend reversed and began trading sideways for several years, with things beginning to perk up in late 2019/early 2020. You see the COVID dip and now things appear to be off to the races, with food prices at levels not seen since 2014. This move will have winners and losers from an investment perspective. Companies that struggle to pass along increased costs to consumers (packaged foods, grocers, etc.) will likely underperform. Producers (think farmers, machinery companies, chemical makers) will likely outperform in a rising price environment. 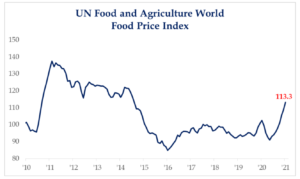 Another key element to the measurement of inflation is transportation. The accompanying charts show a couple of components in the transportation category – oil prices and used vehicle prices. The first chart shows the steady increase in used car prices since the early 2010s. This index was thrown off its trend by COVID in early 2020, but has since accelerated to record highs. Automakers are now warning that shortages in certain key components (semiconductors, if you’re interested) pose constraints to their ability to deliver enough cars for the demand they’re seeing in the market. This could provide fuel for used car prices to continue moving higher. And if it has felt like you’ve been paying a little more at the pump, it’s because oil prices are breaking out of their COVID-19 price ranges.

We’ve shared with you our playbook for this environment. Own the types of things that hold up in an environment of inflation, specifically real assets (infrastructure, real estate, commodities). We’ve tilted clients’ objectives-based portfolios in that direction and will keep a close tab on these developments to determine if any further action is warranted. The time to act is not when inflation is already here, it’s when the signs and signals indicate the possibility for increased inflation exists. Reflation is one of the earliest signs and we’re seeing it in lots of places.

Check out this article's companion entitled, Look Out the Window and See the Miraculous.