It’s the beginning of July which means the year is half over and the second quarter (April – June) is in the rearview mirror. Each month, The Joseph Group’s Investment Strategy Team puts together our Market Health Analysis, a packet of charts which looks at current events and different asset classes to inform our views with regard to portfolio construction. One of the pages in our monthly Market Health Analysis packet looks at a snapshot of index performance across asset classes and I was struck by the fact that in the second quarter, every major asset class (global stocks, bonds, credit, real assets, etc.) had positive performance. As we start the second half of 2021, we thought it would be informative to look back at performance for these four major asset class groups over the last three months and discuss what conclusions we may be able to draw as we look toward the back half of the year.

Global stocks were the second best performing group with the MSCI All Country World Index (ACWI) up 7.4% for the second quarter. However, just looking at the headline number doesn’t do justice to the shifts in leadership happening beneath the surface. 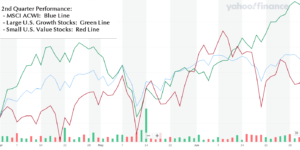 For the 2021 YTD period, small company and value stocks are still significantly ahead of growth stocks (because of their huge outperformance the first three months of the year) but it’s noteworthy to us that small and value company leadership from the first quarter of the year did not continue into the second quarter. Why? Growth stocks tend to outperform in a slow/moderate growth, low interest rate environment where investors are willing to pay up for longer-term growth. On the other hand, a surging economy with increasing interest rates tends to favor smaller, more economically sensitive companies. The fact we saw a leadership shift from small value stocks in Q1 to large growth stocks in Q2 could be indicative that a moderate growth, low interest rate environment may prevail much longer than most investors seem to expect.

What about foreign stocks? Performance of non-U.S. stocks in developed (think Europe and Japan) and emerging (think China, India, and Brazil) markets were in the middle – up around the 5% range for the quarter. Performance of foreign stocks largely tracked U.S. stocks through April and May, but after comments from the Federal Reserve that the Fed may increase short-term interest rates in 2023, the market saw a rise in the value of the U.S. dollar which had a negative impact on foreign stocks during the final weeks of the quarter. 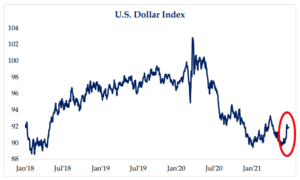 Interest rates and bond prices are like a teeter-totter – when interest rates go down, bond prices go up and vice versa. In the second quarter, the interest rate on the benchmark 10-year government bond declined from 1.74% to 1.47%, leading to a rise in bond prices, with Barclays Aggregate Bond Index up about 1.8% for the quarter.

We don’t think it is any coincidence that growth stocks outperformed as interest rates declined. Lower rates would support the conclusion that inflation may be “transitory” once we work through supply constraints and labor shortages, and we may be returning to a more moderate growth economy later in the year. 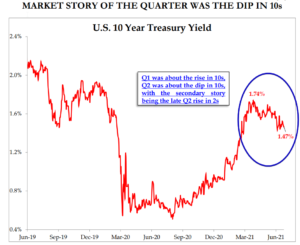 Credit is the term we give to “high yield” or “junk” bonds which pay interest over and above the government bond rate to compensate investors for the risk of default. The BofA High Yield Master index was up about 2.8% for the quarter, reflecting higher interest rates paid by high yield bonds and improving economic conditions.

The amount of interest high yield bonds pay above the government bond rate (known at the “spread”) is currently close to multi-year lows at 3.1%, however, fundamental conditions for high yield bonds continue to be strong. As shown in the chart below, the ratio of credit upgrades to downgrades is at its highest level in close to a decade, reflecting the strength and positive impact of the economic recovery. 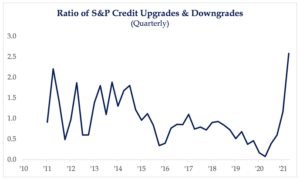 Real Assets is the term we give to commodities, infrastructure, and global real estate – all areas which tend to have a higher sensitivity to inflation. As a group, Real Assets was the best performer of the major asset classes, led by commodities with the Bloomberg Commodity Index up +13.3% for the quarter.

It is worth noting, while inflation sensitive assets outperformed for the quarter, commodities are another area we are seeing shifts in leadership beneath the surface. Energy-focused commodities were strong performers during the quarter with indexes tracking oil and natural gas up +23% and 36% respectively, but lumber prices, which have gotten a lot of attention in the media, are down over -58% from their May highs.

So, as we look back at asset class performance from the second quarter, what conclusions might we draw? Here are a few thoughts:

Check out this article's companion entitled, What You May Not Know About Independence Day.