Positive surprises in recent economic data have coincided with new stock market highs (see last week’s WealthNotes), but we note one certain technical indicator is throwing up a caution flag regarding how much higher the market may run.

The aptly named “Smart Money/Dumb Money” Confidence indicator is one of our favorite measures of investor sentiment.  The indicator uses “real money” gauges to track what different groups of investors are actually doing with their money.

On the other hand, we generally want to do the OPPOSITE of the “Dumb Money” which includes small speculators and more emotional retail investors.  “Dumb Money” investors are usually poor at market timing and tend to get optimistic toward the end of a market rally.

The chart below shows the current level of the “Smart Money/Dumb Money” Confidence indicator.  The Dumb Money appears to have been buying into the recent rally and the Dumb Money confidence is at 77% – an overoptimistic extreme.  Meanwhile, the Smart Money confidence has moved down sharply in the midst of the recent rally indicating a reduction in exposure to the market.  The current level of the spread is 77% – 18% = 59% – more than double the 25% threshold indicating an extreme. 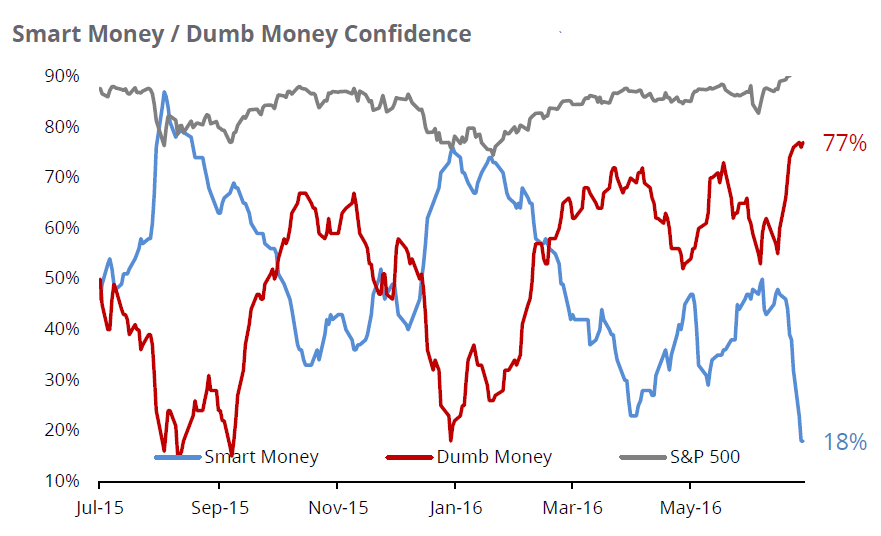 “Smart Money/Dumb Money” is one of many technical indicators and we don’t make investment decisions based on one indicator alone, but the huge extreme between the “Smart Money/Dumb Money” confidence is certainly a caution flag in the midst of headlines concerning new market highs.  At this time, we do not expect to increase client exposure to stocks, and may even look to reduce exposure if we see other indicators show similar extremes.

Check out this article's companion entitled, The Unicorn Farm is Not Hiring.