Earlier this week we had a number of clients and friends take part in our Portfolios at Your Place videoconference. One of the key items we talked about was what things might look like when the economy starts to reopen and the related investment implications. COVID-19 is a global health crisis and a number of countries outside of the United States are ahead of us in terms of lockdowns and reopening their economies. We can get some idea what our own reopening might look like based on what we are seeing overseas.

Over the next few weeks, we believe watching Italy will be important. Italy’s growth rate in the number of COVID-19 cases is similar to that of the United States, but Italy is about two weeks ahead of us. The chart below compares the daily increase in COVID-19 cases per million people between the U.S. and Italy, with Italy advanced by two weeks. Italy has been a hot spot for virus cases but as the number of new cases has declined, Italy has started to ease restrictions. On April 10, bookstores, laundromats, and children’s clothing stores were allowed to reopen and certain industrial activities such as computer manufacturing and paper/cardboard production was allowed to resume. The plan in Italy is for a wider span of openings to start sometime after May 3rd in a “phase 2.” During this first phase there are rules.  Any Italian business that reopens must make hand sanitizer available, enforce the use of masks in enclosed spaces, and use disposable gloves to handle food and drinks. We believe it is likely we will see similar rules here in the U.S. 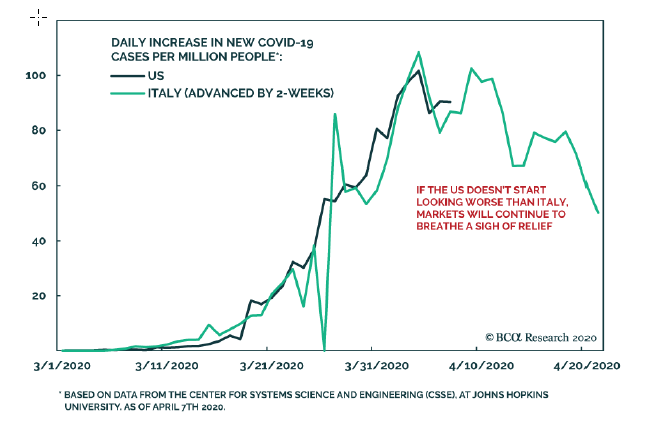 Countries in Asia, particularly China, had the coronavirus hit first so they are further down the road to recovery. Data there definitely supports optimism. Here are a few observations coming out of China:

The positive sales data does not mean everything is normal. The Chinese government is using a color-based “health code” system to track and control people’s movements. Relying on mobile technology and big data, an app generates Quick Response (QR) codes which are assigned to individuals as an indicator of their health status. According to an article on CNN.com, to obtain a health code, citizens have to fill in personal information including their name, national identity number, and phone number. They then have to report their travel history and tick boxes for any symptoms they might have including fever, cough, stuffy nose, etc. From there, after information is verified by authorities, each user is assigned a code in red, amber or green. Users with a red code must quarantine for 14-days, users with an amber code must quarantine for seven days, while users with a green code may move around the city freely. It is worth noting some cities have started to remove the requirement for citizens to show their health code, but is does beg the question – in the U.S., are we willing to sacrifice our privacy to open up the economy?

At the Portfolios at Your Place event, we also discussed the future of travel and shared our belief that vacation travel would bounce back faster than business travel. We believe the widespread acceptance of videoconferencing mean some businesses will be reluctant to pay to send people to jump on a plane. However, we believe people will want to get out of the house to go on vacation. Our view is supported by data from the cruise industry. According to an article in the Los Angeles Times, in the last 45 days, one online cruise marketplace has seen a 40% increase in bookings for 2021 compared with 2019. The article goes on to quote Paula Twidale, a senior vice president at AAA Travel who stated AAA has noticed an increase in cruise bookings beyond the numbers attributed to people re-booking their cancelled trips.

As I type this, the Dow is up 500 points with headlines of a drug company having a drug which showed effectiveness in treating the coronavirus. There’s no doubt life is going to be different after what society has endured over the last month, but there are clearly bright spots emerging.  We continue to believe in the human desire to move forward and make things better.

Sources: Quick rebound in Wuhan car sales give hope to battered industry, TheDay.com;  China is fighting the coronavirus with a digital QR code. Here’s how it works, CNN.com;   Believe it or not, people are still booking cruises for next year, Los Angeles Times

Check out this article's companion entitled, Dig a Little Deeper for Some Good News.