Earlier this week, Jeff Tudor, CRPS, Client Advisor, and Aaron Filbeck, CFA, CAIA, CIPM, Portfolio Manager, attended the Schwab IMPACT Conference hosted in Washington D.C. This annual conference is a great opportunity for firms like ours to attend educational sessions on investments, financial planning, technology, and practice management topics. Among the keynote speakers was Former Fed Chair Janet Yellen, who discussed her views on the current state of the U.S. economy, the likelihood of an impending recession, and what she thinks the Federal Reserve should do with interest rates moving forward. 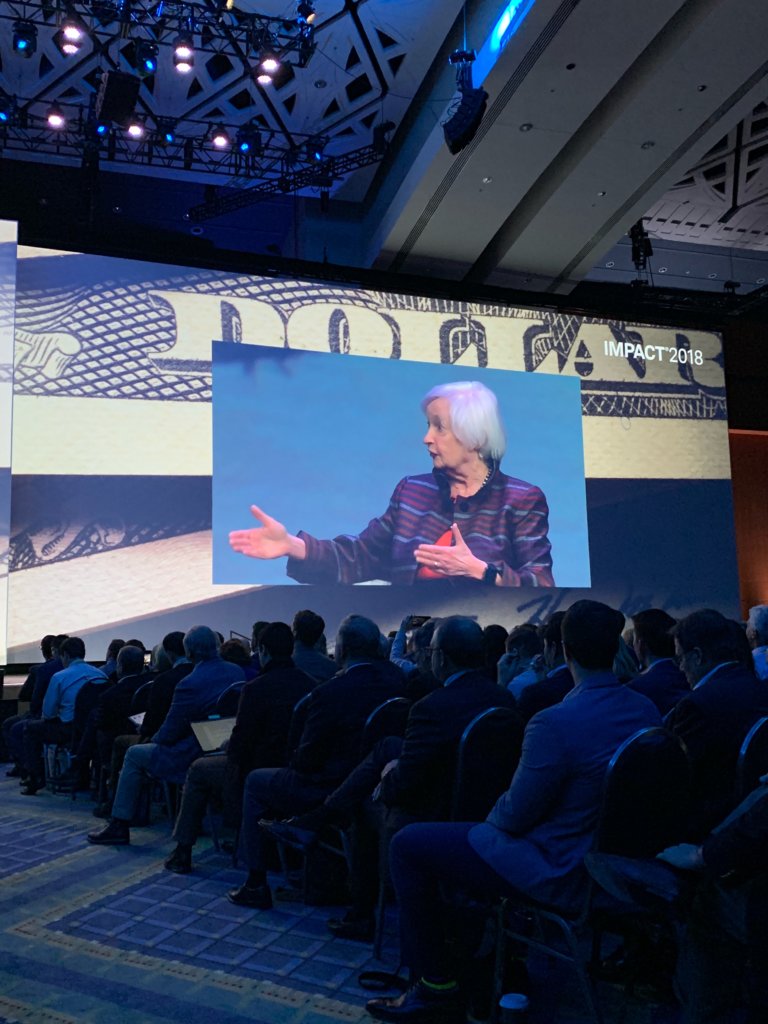 When asked about the potential for a recession in the next calendar year, Yellen said she believed 2019 would still be a year of growth, just not as high as 2018. When the conversation turned to 2020, however, she was much more cautious. On the (relatively) bright side, she said she also believes the next recession, whenever it occurs, will not be to the magnitude of the recession we experienced in the Great Financial Crisis. “Our starting point is very good, we have low unemployment and inflation is contained. I believe this next recession will be much shallower than the previous one.” Essentially implying it may be more of a normal cycle. 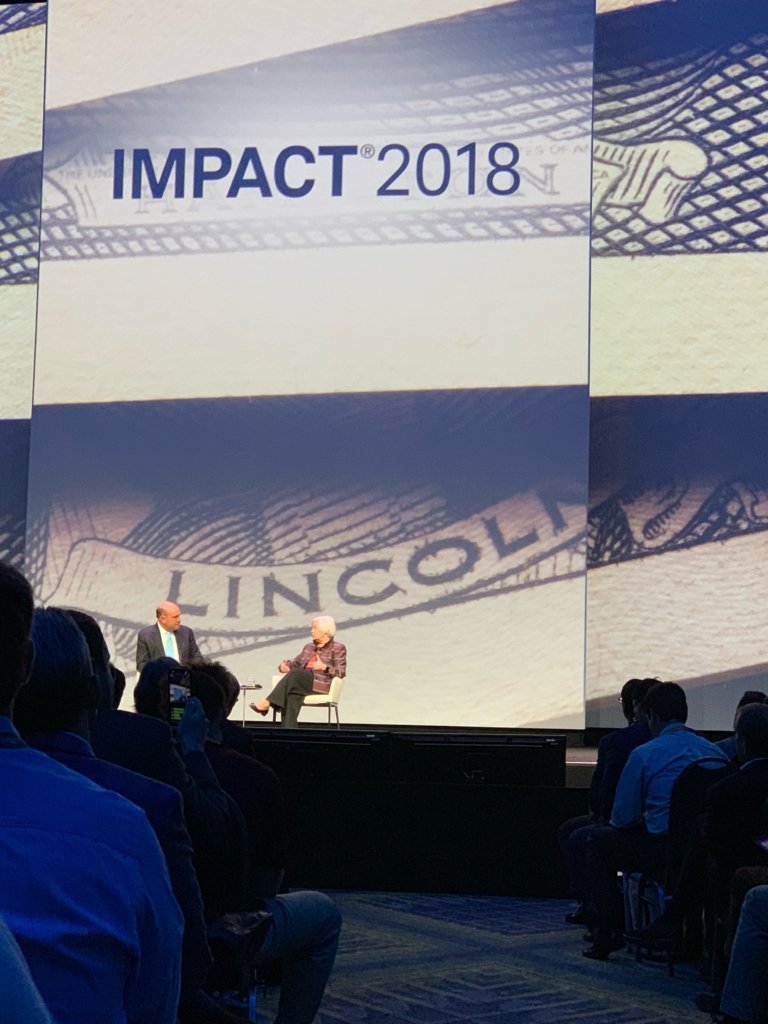 Economic Growth in the U.S.: “I worry that we are headed for an economy that may overheat.”

Regarding U.S. economic growth, Yellen seemed more concerned that things might actually get too good. “Things are great right now, we have record unemployment levels, low inflation, and tax cuts have boosted consumer confidence…the question is ‘where are we heading from here?’” She emphasized the Federal Reserve’s objective is to keep growth sustainable and focus on the long-term. “At this point, a couple more rate increases are necessary to stabilize growth at a sustainable pace and stabilize the labor market so it doesn’t overheat.” 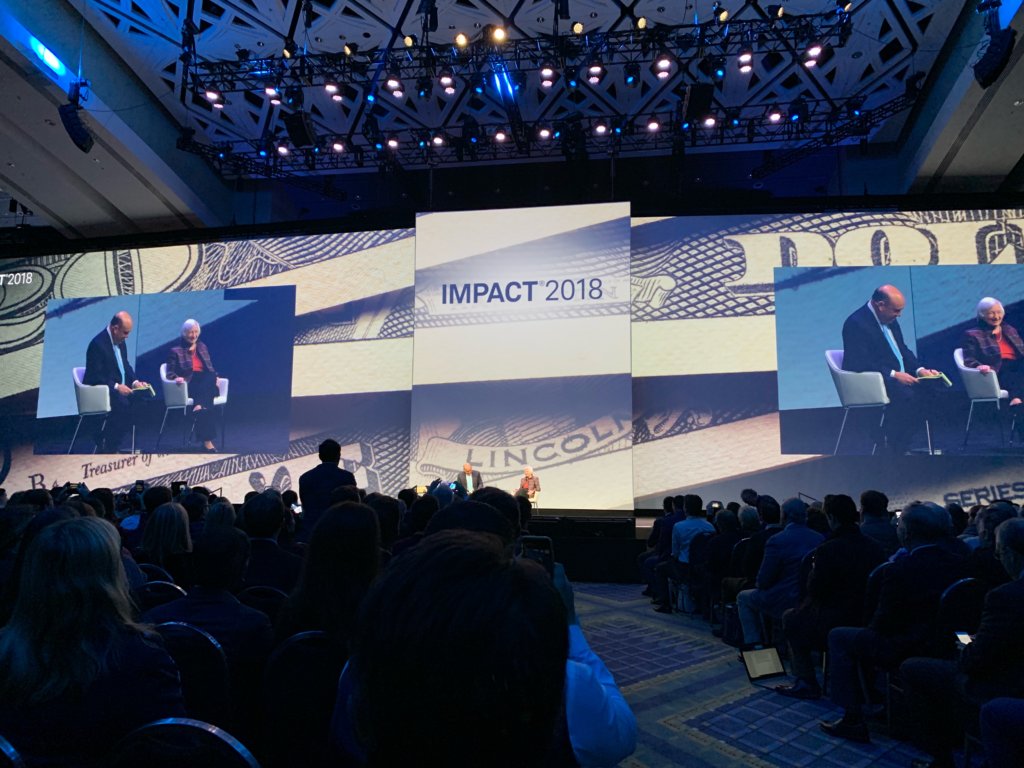 The Fed’s Next Move: “If I were in Powell’s shoes, I would do exactly what he is doing by continuing to increase short-term interest rates.”

Current Fed Chair Jerome Powell has recently been criticized by President Trump for continuing to raise short-term interest rates. Trump believes that raising interest rates offsets his pro-growth initiatives, including the recent tax cut at the end of last year. When asked her reaction to this criticism, Yellen responded by saying President Trump is entitled to his opinion but reminded the audience that Powell’s objective is to be independent and focus on the data. “No president has ever really been happy with the Federal Reserve all the time,” she said. “I commend Jerome for ‘keeping calm and carrying on’ in this environment.” She also indicated she believes the Fed Funds Rate should be around 3.0% over the next decade, suggesting the Fed would have to increase interest rates three more times (0.25% each) to get there.

A lot of what Yellen espoused during her keynote presentation was echoed by many other speakers at the conference: cautiously optimistic in the short-term, but concerns are growing in the distance. Economic growth is good, unemployment is low, and inflation is contained…but where do we go from here? The bar is certainly a lot higher.

At The Joseph Group, we have been having very active discussions about the future. We fully expect the composition of our strategies to look different in three, six, and 12 months relative to today. We believe now is not the time to get defensive too quickly, but as some of the long-term concerns move closer to us, shifts in allocations will be necessary to maximize the change of achieving our clients’ objectives.