Will the Mid-Term Election Year Market Pattern Hold in 2022?

With the S&P 500 mired in a bear market, JP Morgan Chief Market Strategist Marko Kolanovic generated buzz in recent weeks with his call that U.S. stocks would recover recent losses in the 2nd half of 2022 and finish the year largely unchanged. Kolanovic has notoriety in investment strategy circles as the No. 1 ranked equity-linked strategist in last year’s Institutional Investor survey. In the midst of the COVID market plunge, Kolanovic was predicting the market would make new highs, a call which seemed crazy at the time but ultimately proved conservative. In the current environment Kolanovic believes “rates have gone too far and the Fed will surprise dovishly relative to what is now priced into the curve.” He also thinks “the move in markets prices in more than enough recession risk while near term recession will ultimately be avoided thanks to consumer strength, COVID reopening/recovery, and policy stimulus in China.” (Source:  JPMorgan, Bloomberg)

Whether Kolanovic is right remains to be seen, but his views have support with historical patterns which tend to play out in mid-term election years. As shown in the chart below, since 1962, mid-term election years have historically exhibited more volatility than other years with an average market decline of -19%. That’s the bad news. The good news is one year after the correction, bigger average declines have led to bigger average gains – stocks are up one year later with an average recovery of +31.6%. 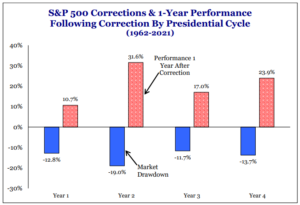 The mid-term election year pattern has historically favored stronger stock performance in the latter half of the year. Looking at mid-term election years since 1994, the average pattern is for the market to chop around for the first nine or so months of the year, ultimately bottoming around August/September, then having a strong 4th quarter rally. If a similar pattern holds for 2022, Kolanovic’s recent prediction of unchanged markets would appear prescient. 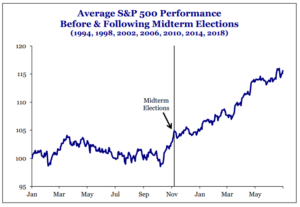 Portfolio Manager Alex Durbin and I discussed the mid-term election year pattern at a recent Portfolios with Panera event and a skeptical attendee wisely questioned whether such a pattern even matters with the war in Ukraine, soaring inflation/gas prices, and consumer sentiment which recently hit record lows. While it’s tough to make predictions, especially about the future (thank you Yogi Berra), we illustrated a couple of specific examples which show such a rebound has happened before.

First, 1982 was a mid-term election year with had nuclear tensions with Russia early in the year, rising interest rates and high inflation. The economy was in recession and Fed Chair Volcker, with regard to increasing interest rates to fight inflation said “failing to bring down long-term inflation expectations now would result in more serious economic circumstances over a much longer period of time.” (Source:  Federalreservehistory.org).  By October of 1982, interest rates and inflation had both begun to decline and the market had a strong recovery in the 4th quarter.  The chart below shows the 1982 S&P 500 performance (blue line) compared to YTD 2022 S&P 500 performance (red line). 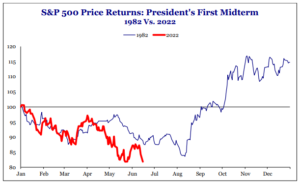 Another historical example is 1970. I won’t say I was around for this period, but 1970 was a mid-term election year characterized by high inflation, soaring oil prices, abandonment of the gold window, wage/price controls, and a mild recession as Congress tried to start closing the budget deficits from the Vietnam War. Looking back with the benefit of hindsight, as stocks fell close to -25% through June, the right move would have been to buy stocks as the S&P 500 recovered in the back half of the year to finish calendar year 1970 broadly unchanged.  (Source:  Macrotrends.net). 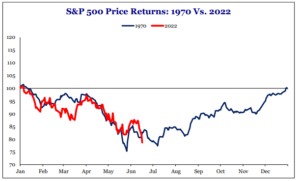 While circumstances are always different, one of the reasons we like historical comparisons like these is investor psychology around macro events can be so similar. With consumer confidence hitting record lows, strategists like Kolanovic calling for a market recovery may seem nutty, but when we look at examples from history, crazier things have happened.