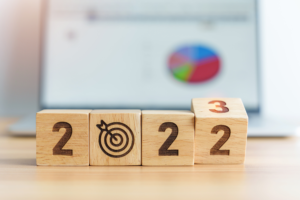 Each January it’s a tradition for us at The Joseph Group to talk about the big picture themes which could impact portfolios in the year ahead. Defining these themes is important for our portfolio management process because they point us toward potential actions we may want to take in the portfolios we have the privilege to manage on behalf of our clients. This past January, we hosted a Portfolios event where we identified “7 Themes (+1) for 2022.” Let’s check in on these themes and what we learned over the course of the year.

1. It’s not the first rate hike which matters, it’s the last one.

We entered 2022 knowing the Fed was going to hike interest rates, but we didn’t know how much. As we look back, the Fed funds rate was 0.25% in January, but sits at 4.50% today. Historically, markets can navigate the cycle as the Fed is hiking, but the challenge is when does the Fed stop? Is it because of recession or something “breaking” in the economy? With the Fed poised to continue to hiking rates into 2023 (Fed funds futures are pricing in two more 0.25% hikes through March of 2023, followed by a pause), this is a theme which will carry over into the new year.

2. If short rates go up, long rates may go down.

With this theme we were alluding to the idea of an “inverted yield curve,” an uncommon occurrence where short term interest rates are higher than longer term interest rates and often an indicator of an economic slowdown. The implication is it may be ok to invest in intermediate (4 – 8 year maturity) bonds even as the Fed is hiking short term rates. In 2022, all interest rates have gone up, but short rates have gone up faster, resulting in an inverted yield curve. As of December 23, the 2-year U.S. government bond rate is 4.29% while the 10-year rate is 3.71%. Within certain portfolio strategies we have acted on this theme late in the year as we have increased our tactical view of bonds from “max underweight” in early 2022 to “neutral” today. Even though the Fed is still hiking, the prospect of an economic slowdown in 2023 has us increasing bond exposure as “insurance” against recession. If rates on longer-term bonds go down, the price of those bonds will likely go up, providing a hedge within portfolios.

The idea here was higher interest rates were likely to have a disproportionate impact on growth stocks and we may want to tilt toward more “value” style and dividend paying stocks. We certainly saw this theme play out in 2022’s tough year for the stock market, with Morningstar’s Large Growth category return of -29.9% significantly worse than the S&P 500 return of -18.5% through December 22. As we enter 2023, could the prospect of lower future interest rates help create a recovery for growth stocks? Hmmm…sounds like a potential theme for 2023….

Well, this theme sure played out. We were referring to the historical tendency for stocks to be much more volatile than normal in a mid-term election year. On average, with data going back to 1962, the S&P 500 has a pullback of -19% in a mid-term election year (which is interesting with the S&P down -18.5% through 12/22). Here’s the good news though – once the market has bottomed, the average return one year later is +32% and in the post-WWII era, the calendar year after a mid-term election year has been positive every time. As we enter 2023, we are shifting to what is historically a much better period for markets within the presidential election cycle. Hmmm…do we have another potential theme for 2023?

5. Inflation – higher or transitory? The answer is yes.

As we entered 2022, there was a raging debate of how quickly high inflation may decline. Our thought was we could see inflation decline later in the year, but some areas of the economy (like food prices and wages) could see higher inflation stick around longer. As we enter 2023, the inflation pipeline is showing multiple signs of lower inflation including falling used car prices, increased inventories for goods, and declining home prices. It’s also worth noting gasoline prices where the national average, after spiking to over $5.01 a gallon in June of 2022 (Source: gasprices.AAA.com), is now $3.10/gallon, lower than the average a year ago of $3.29/gallon. If we were to have told you a few months ago we would be seeing disinflation with gasoline prices, would you have believed us?

6. Can the foreign stock anchor on portfolios become a rocket? Watch the dollar.

At a Portfolios event in early 2022, a client asked, “foreign stocks have consistently struggled – when are we actually going to see foreign stocks outperform?” At the time, I wish I would have been gutsy enough to say, “this year” because I would have been right (but for the wrong reasons). On an apples-to-apples basis across categories through 12/22, foreign stocks have outperformed U.S. stocks. For example, YTD through 12/22, the S&P 500 is down -18.5% while the All-Country World ex-US index is down -15.4%. If we look at the most challenged area of the market, growth stocks, the Morningstar U.S. Large Growth category is down – 29.9% YTD while the Morningstar Foreign Large Growth category is down -25.6%.

7. Make note of valuation extremes but define a catalyst.

Here we were noting certain areas of the global stock market, specifically foreign stocks and U.S. small cap were at historically cheap valuation extremes, but to see a reversal, there would likely need to be some sort to catalyst. As we wrap up 2022, foreign stocks outperformed (with a rising dollar!) but U.S. small caps have declined more than large caps, resulting in an even bigger valuation gap that what existed in January. We’ll certainly note where the valuation extremes exist as we enter 2023.

+1.  What’s the surprise going to be and how will we respond?

We put the same +1 theme in every year because every year there seems to be a surprise in financial markets. We would venture to say the surprise in 2022 was Russia’s invasion of Ukraine in February, which was followed by a spike in many commodity prices mid-year, but a decline which has recently taken the price of many of those commodities (like oil) to levels below where they started the year.

We’ve been discussing the major themes which are likely to impact portfolio decisions in 2023 and we look forward to sharing them with you. Here is your call to action:

We appreciate our clients’ trust and confidence in what has certainly been a challenging market year in 2022. As we enter 2023, we have hope and optimism regarding what may lie ahead and we our treasure our privilege to use planning and portfolios as tools to help our clients live out their purpose.

Check out this article's companion entitled, Giving from the Heart.